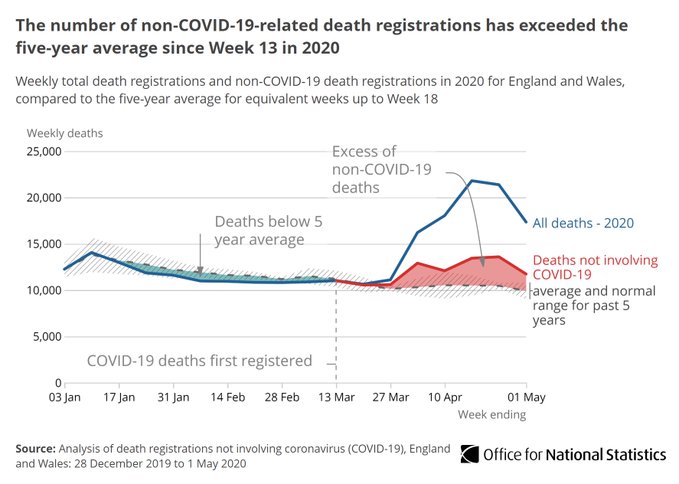 The number of people with Covid-19 in England has fallen to around 5,600 new infections a day from around 8,000 reported last week, according to figures out this morning from the Office for National Statistics.

However they also say that there is evidence that Covid-19 is currently under-diagnosed.

Between 7 March and 1 May 2020, a total of 130,009 deaths were registered across England and Wales; this represents an excess of 46,380 death registrations compared to the five-year average, and 12,900 of these deaths  did not involve the coronavirus virus.

“Many deaths where Covid-19 was not mentioned were displaced from hospitals to care homes and private homes,” the ONS’ head of health analysis Nick Stripe has said.

The ONS said that if patients have been discharged from hospital sooner than they may have been typically, because of pressure on the NHS’s resources, this “could have resulted in some deaths occurring in care homes or private homes that would have otherwise occurred in hospital”.

The largest increases in non-COVID-19 deaths compared to the five-year average are seen in deaths due to “dementia and Alzheimer disease” and “symptoms, signs and ill-defined conditions”

Deaths due to causes such as asthma and diabetes increased up to the week ending 24 April 2020 and occurred increasingly outside hospital; this could suggest a delay in care for these conditions is leading to an increase in deaths, although this rise could also be related to undiagnosed COVID-19

A full analysis of non Covid 19excess deaths will only be possible in several months’ time when longer-term effects and additional data, both death registrations and other sources, can be considered says the ONS

Disabled people make up six out of every ten Covid deaths