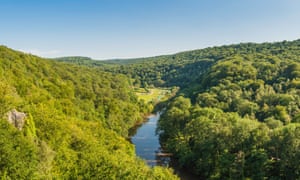 Council leader Sir Richard Leese is among the signatories to an open letter to the Prime Minister asking for support and commitment to the plan which would see 50 million trees planted over the next 25 years in the North of England by the Woodland Trust and their partners.

The forest will span 120 miles, connecting Manchester with Liverpool and Lancaster in the west and Sheffield, Leeds and Hull to the East, benefiting 13 million residents and generating £2.5 billion in social, economic and environmental benefits. It would absorb up to 7.5m tonnes of carbon.

The letter, which is signed by more than 120 northern leaders and MPs from across the political spectrum, asks for the Prime Minister’s commitment to deliver the Northern Forest and look at opportunities that support the development of green investment models.

“We are bringing forward an action plan which will explain how Manchester will achieve this ambitious target.

“The Northern Forest initiative, which would help absorb millions of tonnes of carbon, is entirely complementary to that wider goal and something we wholeheartedly endorse.”

Mayor of Sheffield Dan Jarvis, who is co-ordinating the Northern Forest campaign, said: “It will be transformational for more than 13 million residents, improving their health and wellbeing. It will help habitats thrive, a woodland culture to flourish as well as helping to tackle climate change, reduce the risk of flooding and create thousands of new jobs.”

Darren Moorcroft, CEO, Woodland Trust, said: “The Northern Forest represents the green lungs of the Northern Powerhouse. This pioneering project spearheaded by Woodland Trust and the Community Forests will deliver millions of new trees planted, and billions of pounds worth of economic, social and environmental benefits to the region. If we are to tackle the climate and biodiversity crises the world faces, internationally significant projects like the Northern Forest must be at the forefront of bold, ambitious domestic thinking.”

Coca Cola the biggest plastic polluter on our beaches