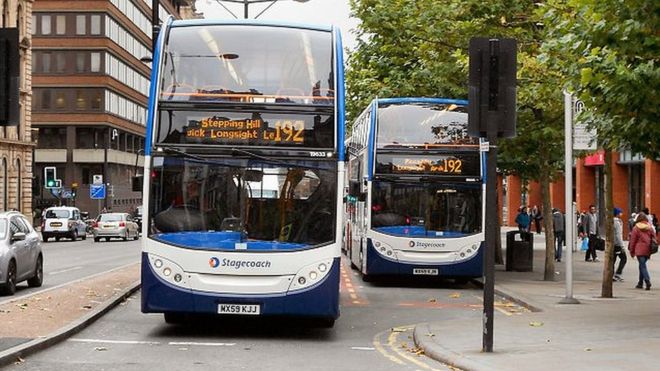 Plans to franchise Greater Manchester’s buses would lead to inflation-busting fares rises, higher taxes, plummeting passenger numbers, and no investment to tackle the real barriers to bus use, according to documents made public as part of a consultation process.

Greater Manchester Combined Authority’s own franchising proposal admits a multitude of weaknesses in around 1,000 pages of documents the authority was obliged to make public.

Analysis of the GMCA’s Doing Buses Differently proposed franchising scheme for Greater Manchester reveals the cost as being £266m, close to double the £134.5m originally suggested and that customers would be hit by annual, inflation-busting fares rises

Gary Nolan, Chief Executive of OneBus, which represents the majority of bus operators in Greater Manchester, says, “Despite promising the world, the frightening future of buses under franchising has been revealed in this consultation, which at over 1,000 pages is close to indecipherable for most people.”

“Residents are already realising that they will ultimately pay to run the service, but likely have no idea of the additional funds that will be needed for the council to acquire bus depots, deliver greener buses, or even to pay interest payments on the borrowing required. It is very concerning that these points have remained hidden until now.”

The franchise consultation states that fares will increase at the rate of inflation (RPI) plus +1.4% every year. If this had been applied in Greater Manchester over the last ten years, fares would have increased by more than 40%. Not only that, but Office for Budget Responsibility data shows that RPI inflation will be 2.7% in 2020 Q1, rising to 3.1% in 2023 Q4, which means tickets would rise by an additional 18% by the end of 2023. In this time, the price of Greater Manchester’s cheaper £19 weekly ticket would rise to cost more than London’s £21.

This may be due to the authorities needing additional funds on top of the £134.5m budget they have already announced: acquiring depots is expected to have an additional upfront cost of £85.7m, financed by borrowing, interest on which will cost a further £46.3m over this period. A contribution from central Government has also not been confirmed.

Partnerships, however, have provided improvements for passengers across the country, including the Merseyside Bus Partnership, which has seen a 15% increase in fare-paying passengers since 2013-14, while the number of bus journeys by young people has risen by 168%. Similarly, partnership in Bristol has seen passenger numbers grow by 52% since 2013, while the Sheffield Bus Partnership has delivered more than a million extra adult journeys by bus over the past seven years.

In Greater Manchester, 80% of all public transport journeys are currently made by bus and 90% of passengers report being satisfied with bus services – the same as Metrolink and higher than London’s debt-ridden franchised system, 11% lower.

Nolan concludes: “We do not believe that Greater Manchester taxpayers should be forced to pay for such a costly and unnecessary system, which promises higher fares without addressing congestion or air quality – the real crisis in our region today. What our new partnership alternative offers is millions more invested in greener buses, improved ticketing and live journey information, far quicker than any franchised system can deliver. The franchise documentation shows that partnership has a better benefit-cost ratio, clearly showing that taxpayers get better value for money from our plans. Our vision is investing in a network fit for the future, delivering regular improvements for the travelling public.”

Cities “must become car-free to survive”