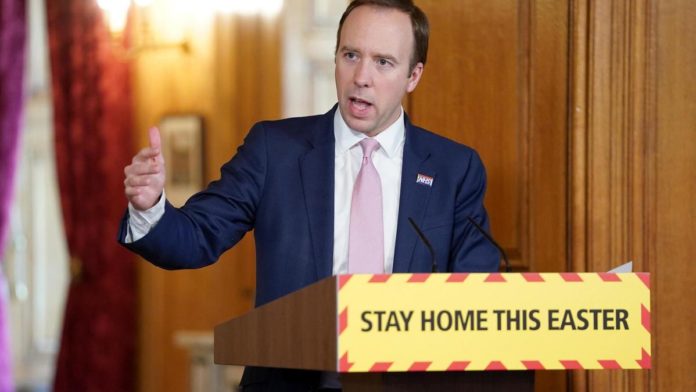 The number of hospital deaths from Coronavirus has risen by 737 in the last twenty four hours to stand at 10,612

The health Secretary Matt Hancock described today as being a sombre day in the Daily Press Conference adding that 19,945 people had now been admitted to hospital since the crisis started.

Responding to reports in the Sunday Times, he confirmed that an app was being tested which will allow people to log their symptoms anonymously an emphasised that the data was only to be used by NHS staff.

Yvonne Doyle, medical director and director of health protection for Public Health England spoke after the Health Secretary saying 838 NHS staff had tested positive yesterday and today.She also said that while the rate of people taking up hospital beds in London is stabilising, in other regions such as the North West and the North East trends were worsening now

The Prime Minister has been released from hospital.In a video message he said that British public have formed a “human shield” around the NHS and that he has seen the pressure the service is under over the past seven days, thanking the wide range of staff who continue to work throughout the outbreak.

“It is thanks to that devotion, that duty, and that love, that out NHS has been unbeatable.”

The number of people who have died from coronavirus around the world has reached 110,042, The figures are according to the John Hopkins University tracker that says that the numberof confirmed cases is approaching 1.8m.

Almost one in five of global deaths from the pandemic are in Italy, with nearly the same proportion in the United States .

Man killed in Altrincham after being hit by a taxi