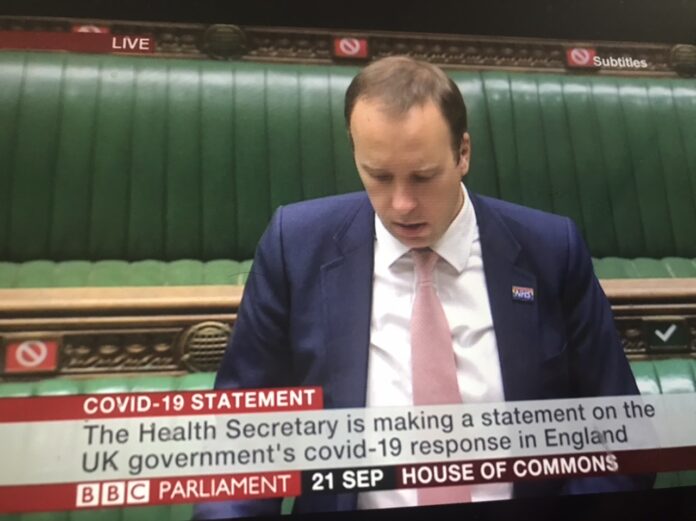 The Chief Medical Officers of England, Wales, Scotland and Northern Ireland have said in a joint statement that the risk level should increase to signal the increasing threat posed by Covid-19 transmission.

“After a period of lower Covid cases and deaths, the number of cases are now rising rapidly and probably exponentially in significant parts of all four nations,” they said.

“If we are to avoid significant excess deaths and exceptional pressure in the NHS and other health services over the autumn and winter everyone has to follow the social distancing guidance, wear face coverings correctly and wash their hands regularly.”

This is the first time the alert level has been raised, rather than lowered, since the system was established in May. and restaurants could shut down by patrols immediately if they allow people to flout the “rule of six” law and groups could be broken up and fined.

According to the Sun’s political editor Harry Cole, the rules will form a package of tough new measures which will be unveiled by Boris Johnson this week

A government source said: “Police and councils will be told to act immediately when they see the rules being broken

“Lots of pubs and restaurants are following the law, but others are not.

“Those that flout it will be shut down.”

They said that the epidemic is now doubling roughly every seven days “if that continues unabated…there would be something like 50,000 cases per day by the middle of October, and that will lead to “200-plus deaths per day” by November.

Speaking in the House of Commons, the Health Secretary has said that people looking after children  under the age of 14, or adults for caring purposes, in formal and informal arrangements, will now be allowed under social restrictions

The Prime Minister will update the House tomorrow with any more action we need to take.

“This is a moment where we once again must come together to tackle this deadly disease.” says Hancock