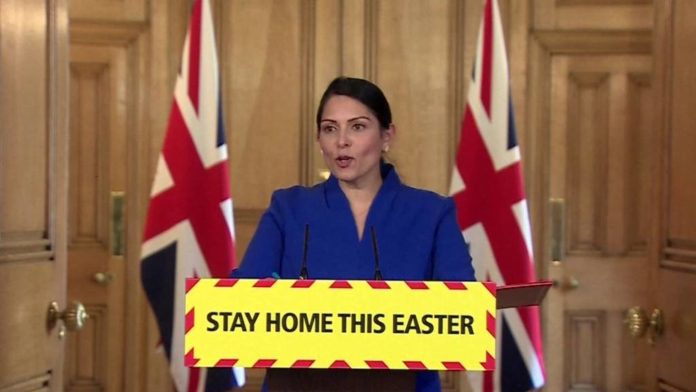 9,875 people have now died in hospital from Coronavirus , an increase of 917 on yesterday’s figures.

The Home Secretary Priti Patel announced the figures as she led the Daily Press Conference adding that 78,991 people have tested positive for Covid-19 across the UK, excluding Northern Ireland and 20,101 patients are currently in hospital in Great Britain who have tested positive.

The Home secretary also announced that she is launching a national domestic abuse campaign to reach out to those who are at risk of abuse to signpost victims to where they can access help they need at this time.

She added that to ensure that victims have a safe place to go to, the government is “looking at alternative accommodation” to provide refuge at this time.

Martin Hewitt, the chair of the National Police Chiefs’ Council,also speaking at the Press Conference said that most people have quickly understood why it’s important to follow the rules on socail distancing and no enforcement has been necessary.Early data he said, from 37 forces revealed that 1,084 fines have been issued in England and Wales up to 8 April, an average of less than 84 per day across those forces.

He also added that in the few cases where officers or police forces have “made mistakes in interpreting the new regulations” they have quickly sought to correct them and provide the necessary clarity.