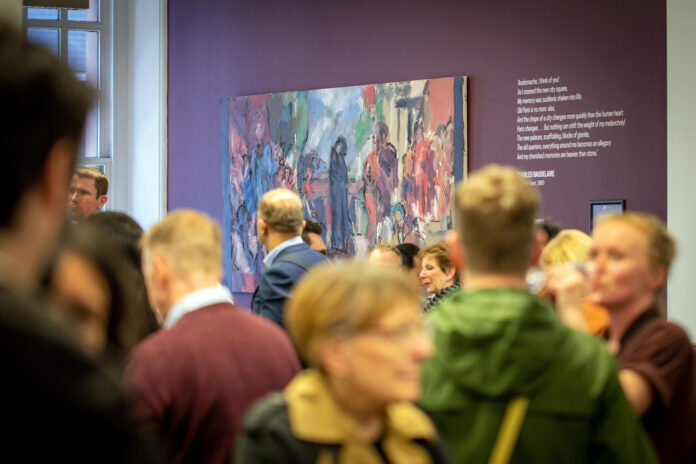 The worlds of art and business came together at the opening of the Ghislaine Howard Collection at Greater Manchester Chamber of Commerce.

More than 160 people attended the event at the Chamber’s Elliot House headquarters to view the work of the Glossop artist, whose powerful series of pictures of a Muslim man offering to hug passers-by as a show of trust in the aftermath of the attack on Manchester Arena gained national attention.

On display was a selection of Ghislaine’s work, which she co-curated with her husband Michael Howard and the Creative Directors of Haigh Hall, acclaimed filmmakers and artists, Al and Al. Paintings were on show across three floors of the building and will continue as a permanent exhibition which will be open to the public.

Clive Memmott OBE, Chief Executive of Greater Manchester Chamber of Commerce, said, “When we first moved to Elliot House, I didn’t want to have pictures of buildings but pictures that represented the people of Manchester. This is art that brings people together, showcasing human experiences and emotions.

The ambition is to showcase top quality art, that is beautifully and thoughtfully displayed, in a working environment that members, guests and visitors can get really close to and interact with.”

Thom Hetherington, Founder and CEO of Manchester Art Fair, who attended the opening of the exhibition, said, “Amazing to see the scope and scale of the installation across multiple floors and rooms. It’s rare for a city to work with such a credible artist at such a deep granular level.”

Members of the public will be able to view the Ghislaine Howard Collection at Elliot House, 151 Deansgate, Manchester, on the last Friday of every month (excluding December) from 12pm to 5pm. There will also be the opportunity to purchase some of the paintings on display. In addition to the works already on show, there will be a changing group of works entitled ‘10 Boroughs/10 Paintings’ which will highlight every part of Greater Manchester. Click here.

Ghislaine was born in Eccles and studied Fine Art at Newcastle University. She lived in London and Paris before moving back to her native North West with her art historian husband and making their home in Glossop.

Ghislaine is known as a powerful and expressive painter, whose work charts and interprets our shared experience. She was named Woman of the Year in 2008 for her contribution to art and society. She first came to public attention with her ground-breaking exhibition concerning pregnancy and birth, the first of its kind, at Manchester City Art Gallery. Entitled ‘A Shared Experience’, the exhibition attracted much critical acclaim.

One Day More from Les Misérables is voted BBC Radio 2 listeners’ all time...