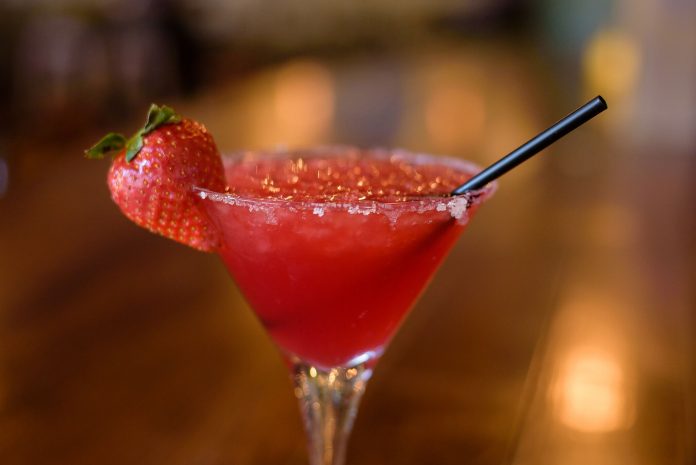 About Manchester had an invite to Around the World earlier this week and sampled some of the eighteen cocktails on offer on its summer menu.

Hidden downstairs in the Printworks Bierkeller, this was the first time that the About Team had ventured down.Enticed by an opening glass of champagne and some salmon and dill canopies, it was soon time for action.

First on the menu a blend of Southern Comfort, pineapple, and Sailor Gerry, for those not in the no, that is a spiced rum, the cocktail is named after a Pink Floyd Track Comfortably Numb, that’s the one will the long guitar solo at the end of Side Three on the Wall album. (Verdict-quite refreshing)

Next up, a mixture of Limoncello and believe it or not Peroni and remarkably it tastes really nice.The cold lemon offsets the Peroni and we can heartily recommend it.

Onto the Strawberry Mojito, perfect for Wimbledon week and then the bar’s take on the Cosmopolitan, that cocktail that gained notoriety in the 1990’s and New York bases Sex in the City.Here it features Absolut Citron and Cointreau.

We want you to try all eighteen of our summer cocktails says Group Marketing Manager, well that’s four down so far.

Well, nothingsays sunny days quite like a fruity cocktail and Around The World bar & lounge has created a new cocktail menu which shakes up summer in a glass.

The bar, in the Bierkeller Entertainment Complex in the Printworks, has added 18 seasonal cocktails to its list of classics and favourites.

And they’re all made with fresh fruit purees so you get to feel virtuous and healthy while you enjoy your favourite gin, vodka, whiskey and rum blends!

The new menu includes a Passion Fruit Margarita, Strawberry Mojito, Coconut and Lime Daiquiri and an English Country Garden made with Hendricks gin, elderflower liqueur, lemon and topped with prosecco.

Bar supervisor Dan Watson says the key to making the perfect summer cocktail is getting the balance of sweet and sour just right, and mixing up vibrant colours to recreate a sun-soaked holiday vibe.

“We look to create a contrast because you can’t just have sweet sweet sweet, that’s not a good combination. We only use fresh purees because they taste much more natural than regular juice, they give the cocktails texture and they look nicer because the colour is stronger.”

Dan says the summer menu was put together after a series of tasting sessions.

“We’ve got 18 new ones which made it onto there, but we rejected a lot more than that,” he explains. “We sample in groups because it’s important to get a lot of people who like a combination, one opinion isn’t enough, so a lot of it is trial and error. Something can look amazing but taste awful and then it’s back to the drawing board.

“A lot of the cocktails on the new list came from experimenting and sharing ideas, often putting together ingredients you’d never normally consider and coming up with amazing results.”

General manager Hannah Smithies says the aim of a great summer cocktail is to take people back to their holidays, conjuring up memories of lying by the pool with a long chilled drink.

“That’s one of the reasons why we use more fruit in the summer menu because it recreates that feeling which everyone loves,” he says.

“Around the World specialises in cocktails so we wanted to come up with a list that appeals to most people and to use a variety of spirits to cater for every palate. We didn’t just want a whole gin menu or a whole rum menu because then you exclude a lot of customers.”

Sean says cocktails are now a favourite with both sexes, and men are increasingly ditching beer to try them.

“Cocktails are really popular with everyone at the moment, and a lot of guys who a couple of years ago wouldn’t have touched them and would have gone straight for a pint, are now thinking, I wonder what that’s like? That’s a good thing because, especially in the summer, a refreshing drink is just what you need.”