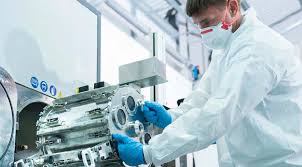 Manufacturing activity dropped in the quarter to July, but firms expect a slight recovery in the next few months, according to the CBI’s latest quarterly Industrial Trends Survey.

The survey of 291 manufacturing firms showed that optimism fell at the fastest pace since July 2016 – just after the referendum – and investment spending plans weakened again.

New orders declined sharply in the quarter to July: both new domestic and new export orders fell at their fastest respective paces since the financial crisis. And overall order books were below “normal” to the greatest extent since 2010. Meanwhile, export optimism declined at a brisk pace.

“As the tailwind from stockpiling weakens, clouds are gathering above the manufacturing sector. It’s being hit by the double-blow of Brexit uncertainty and slower global growth.

“With orders, employment, investment, output and business optimism all deteriorating among manufacturers, it’s crucial for the new Prime Minister to secure a Brexit deal ahead of the October deadline. And get on with pressing domestic priorities from improving our infrastructure to fixing the apprenticeship levy.

“This will allow firms to focus on investing in new technology and tackling the skill shortages that plague this sector.”

“With activity contracting, sentiment deteriorating, and key investment decisions on hold, there can be no clearer evidence of how much Brexit uncertainty is continuing to hold back the UK’s manufacturing sector.

“It is critical that the next Prime Minister puts an end to the deadlock so that manufacturers have the certainty needed to invest in their growth and productivity.”

Investment intentions for the year ahead deteriorated compared to last quarter, with firms expecting to spend less on both tangible and intangible investments. In addition, headcount dropped in the quarter to July at their fastest rate since April 2010. However, firms expect employment to pick up again next quarter.

Although pre-Brexit stockpiling boosted growth in Q1, the underlying momentum of the UK economy is expected to remain modest (contingent on a Brexit deal being ratified by October, which remains the major risk to the UK economic outlook). Meanwhile, global growth is expected to slow as trade tensions continue to erode world trade flows.