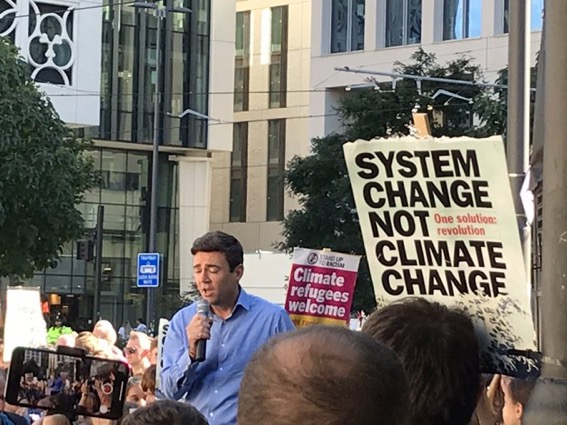 Crowds have been gathering in the centre of Manchester this morning as part of today’s Global Climate Strikes.

They have been inspired by Greta Thunberg, and have seen school children and young people around the world staging monthly protests for radical climate action.

Greater Manchester’s Mayor Andy Burnham was quizzed on stage by ten year old Lilia who confronted Burnham with the words “You promised us you would help us – you have not”.

In response the Mayor acknowledged that things were not moving as fast as he would like, putting the blame fairly and squarely on central government funding.

He pointed though to the region’s investment in public transport, the moves towards cycling and walking and the trams being powered by renewable energy.

Lilia questioned why the airport was not  included in carbon emission figures and why the Greater Manchester pension fund invested millions in fossil fuels.

The national campaign is a esponse by a coalition of organisations to the young people’s call to action. The strike will see millions of protesters around the world walk out of our workplaces and homes to join young climate strikers on the streets and demand an end to the age of fossil fuels.

UK homes unfit for the challenges of climate change

Hedge your bets with ‘super plant’ to fight air pollution