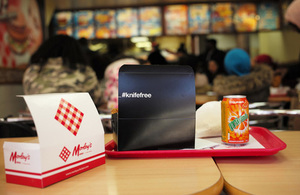 Special chicken boxes warning young people about the dangers of carrying a knife are being introduced in chicken shops across Britain, the policing minister has announced today.

The insides of the boxes are printed with real life stories of young people who have chosen to pursue positive activities, such as boxing or music, instead of carrying a knife.

The boxes will replace the standard packaging in both independent and branch owned chicken shops, including Morley’s, Chicken Cottage and Dixy Chicken. Many of the participating shops will also have screens showing the #knifefree campaign.

In addition, new #knifefree street teams will be visiting convenience stores, hair salons and barber shops as well as places of worship and community centres across London, Manchester and Birmingham.

The street teams are made up of people who are trained to speak to local communities about the campaign and on the risks of carrying a knife.