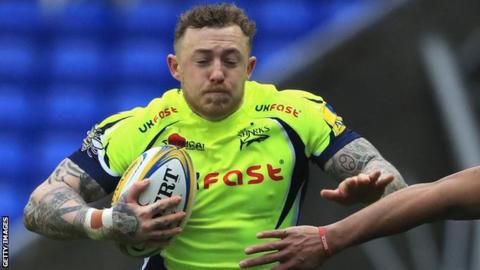 Sale Sharks have confirmed that Josh Charnley has taken up an option to return to Rugby League and that he has joined Warrington Wolves with immediate effect.

After excellent discussions between the club and Warrington Wolves, with whom we enjoy a tremendous relationship, an agreement was quickly reached for Josh to return to Rugby League.

The 26-year-old winger has signed a contract through until November 2020 with the Wolves.

Josh made the cross-code switch from League to Union and joined the Sharks in late 2016 after a hugely successful six year spell with Wigan Warriors for whom he played more than 170 times, winning two Super League titles and two Challenge Cup medals.

He went on to make 32 appearances for the Sharks and impressed everyone with his professionalism and commitment during his time with the club.

Commenting on the news, Sale Sharks director of rugby Steve Diamond said: “Josh has been a pleasure to work with and he has been a great servant for Sale.However, we have a highly competitive squad here at Sale and Josh’s desire was to play every week and we couldn’t guarantee him that.”

Brinning nominated for Rookie of the year award