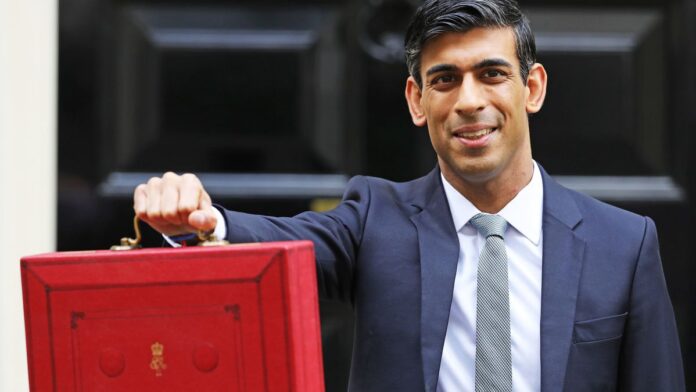 The U.K. economy will return to pre-Covid levels at the turn of the year, Chancellor Rishi Sunak has said as he presented his Autumn budget.

The Office for Budget Responsibility (OBR) has lifted its prediction for economic growth in 2021 to 6.5%, up from its previous forecast of 4% and also says that its estimate of the long-term “scarring” effect of Covid-19 on the economy is reduced from from 3% to 2%.

However Sunak warned that inflation could reach 4 per cent, telling MPs inflation was rising because “demand for goods has increased more quickly than supply chains can meet” as economies around the world reopen

Before Rishi Sunak even stood up to speak to MPs and unveil his 2021 Autumn Budget, the Treasury had already announced a string of measures it planned to include including the minimum wage rising from £8.91 to £9.50 an hour for workers over 23, the public sector pay freeze was ending for 5 million nurses, teachers and members of the armed forces and England’s city regions would receive £6.9 billion of cash for train, tram, bus and cycle projects.

There was good news for the hospitality industry

The chancellor slashed business rats by 50% – up to £110,000 – for businesses in the retail and leisure sectors for a year.

From 15 rates of alcohol duty, there will just be six categories in a system based on the idea “the more alcohol, the higher the tax”.

That means strong ciders and fortified wines will cost a bit more.

By contrast, there will be price falls for Champagne and other sparking wines, fruit ciders, and lower strength beers and wines will get cheaper.

There is also a 5% cut in taxes on pints pulled in pubs.

“We’re making sweeping reforms to our outdated alcohol duty system. Introducing a new system that is simpler, fairer, and healthier – as well as permanently cutting the cost of a pint by 3p,” Sunak said.

The Chancellor also scrapped a planned rise in duties.

“The planned increase in duty on spirits like Scotch Whisky, wine, cider and beer, will all, from midnight tonight, be cancelled,” Sunak said.

On transport the planned rise in fuel duty will be cancelled

Some £2.6 billion will be spent to create 30,000 new school places for children who have special educational needs and disabilities.

The Budget also included a fund of £1.6 billion over three years to help roll out new ‘T-levels’ for 16 to 19 year olds as well as £550 million for adult skills in England.

A new plan to help 500,000 adults improve their numeracy.The Budget included a £500 million plan to support parents and children in England.

That is made up of £200 million to support families with complex issues; £82 million for parenting advice centres in 75 different areas; £100 million for mental health support for expectant parents; and £50 million of breastfeeding support.

The Chancellor announced a string of plans to boost communities across the UK.

This included £205 million to fund 8,000 sports pitches, doubling of tax relief for theatres, museums an galleries as well as support for projects from Liverpool to south Leicester.

Another £560 million was allocated for youth services over the next three years, enough to fund up to 300 youth clubs in England.

There was also funding to turn more than 100 areas of derelict land into new ‘pocket parks.

There will be lower rates of Air Passenger Duty for domestic flights only to boost local airports “and bring people together across the UK”; but higher passenger duty for flights over 5,500 miles

£24bn is earmarked for housing: £11.5bn to build up to 180,000 affordable homes, with brownfield sites targeted for development; £5bn for the removal of unsafe cladding for the highest risk buildings

Rishi Sunak said before sitting down after a speech lasting an hour that jobs, growth and wages are all up, and there will be a pay rise for more than two million people.

At the same time, the government will be investing in infrastructure and skills, he states.

Public finances will be “back in a better place” and the Budget helps with working families and the Budget will build a stronger economy for British people.

“This is a tale of two Budgets for families on low incomes. For those in work, the change to the taper rate and work allowance, alongside the National Living Wage increase, are very positive steps, allowing low-paid workers to keep more of what they earn. Together these measures improve our social security system for working families and demonstrate a serious intent to turn the tide on the pre-pandemic trend of rising in-work poverty.

“But the reality is that millions of people who are unable to work or looking for work will not benefit from these changes. The Chancellor’s decision to ignore them today as the cost of living rises risks deepening poverty among this group, who now have the lowest main rate of out-of-work support in real terms since around 1990.

“Among the people in our society who cannot work are cancer patients, people with disabilities and those caring for young children or elderly parents. Their energy bills and weekly shop are going up like everyone else’s and they face immediate hardship, hunger and debt in the months ahead. The Chancellor had an opportunity to support families on the lowest incomes to weather the storm ahead, and he did not take it.”

Katie Gallagher, managing director of Manchester Digital, said: “We welcome the £3.8 billion investment into education, in particular digital and tech skills. This funding seeks to provide long-term support for the growing digital and tech sector, as part of the Government’s overall aim for the UK to become a science and tech superpower.

“These new announcements also build on previous pledges from the Conserative Party Conference and the recent announcement of the Government’s AI strategy.

“However, we firmly believe that the whole education curriculum needs to be overhauled to ensure it is able to deliver the volume of digitally-skilled people we are going to need for the future.

“There are also concerns from within the tech sector around the employer engagement on T-Levels and more needs to be done to support employers to offer work placements to younger students.

“The Northern tech and digital industry will play a vital role in the Government’s levelling up agenda and re-building the economy after the Covid-19 pandemic. We hugely welcome the additional funding for Greater Manchester’s public transport system. This will continue to make the North a more attractive place to live and work, helping with vital tech skills recruitment and more tech companies moving their bases to Greater Manchester.”

“Today, the Chancellor has shown a genuine willingness to listen to business with measures that will get firms innovating and help the economy to grow. It takes several positive steps forward, but isn’t bold enough to deliver the high investment, high productivity economy the Government seeks.

“On Business Rates, the Chancellor made real strides in making the system more palatable for businesses in the shorter term.  More frequent valuations, wider reliefs and improving the incentives for firms to decarbonise their premises is what firms have been calling for. But the hard truth is that wholesale reform to unlock investment was rejected today. The Government missed the opportunity to truly reform a business rates system that diminishes Britain’s high streets and factories.

“The Government’s commitment to innovation will be a central cog to the UK’s prospects to leading in the industries of the future. This will be essential to be globally competitive so the Government must stick to these targets in the coming years.

“Meanwhile, businesses will welcome the new skills bootcamps. This agile approach must now be the watchword when it comes to revolutionising the skills landscape, including for apprenticeships.

“This Budget alone won’t seize the moment and transform the UK economy for a post-Brexit post-Covid world. Businesses remain in a high tax, low productivity economy with concerns about inflation. But the Budget will have a positive impact across the economy and makes several changes that will be welcomed by UK businesses.”

“The Chancellor shared OBR expectations that the UK’s economy will recover more quickly, with a forecast for the economy to return to its pre-Covid level at the turn of the year – earlier than they thought in the Spring Statement. As a result, this Budget included several spending announcements.

“However, there are many businesses in sectors and regions disproportionately impacted in the past 20 months that are not expecting their own recovery until further ahead of that date. Our most recent Rethinking the Economy survey found that 35% of companies in the region predict it will take up to another 12 months to return to pre-Covid-19 revenues, so targeted support is still needed to deliver a sustainable and more “levelled-up” recovery.

“There were some positive announcements around skills and talent with investment, which will be welcome news for many businesses struggling with skills shortages and finding that this is the greatest barrier to growth. But, accessibility will be key to the success of the “skills revolution”. This includes ensuring 16–19-year-olds from all backgrounds and regions are able to access the opportunities and that businesses of all sizes and from all regions are then able to easily access this talent pool.

“Businesses consistently tell us their biggest ask of the Chancellor is a simpler tax system and for some industries that was delivered today with the alcohol duty system set to be simplified and altered, new small producer relief for craft breweries, and draft relief to support pubs. This is a positive result for a sector which has faced ongoing challenges over the past 20 months.

“Overall, the statement included high levels of spending and investment, alongside lots of cuts and incentives on taxes and duties. But before everyone celebrates with a sparkling wine – which we’re set to pay less duty on –we’ll need to look at the detail to understand how everything is being paid for.”