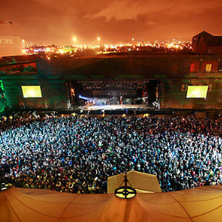 Sounds of the City is back taking over Manchester’s Castlefield Bowl in summer 2019.

Some of the most acclaimed live artists and shows including The Wombats, Elbow, The National, Kylie Minogue, The Kooks and Haçienda Classiçal will be taking the helm of what has become a staple part of the Manchester music scene.

Following a landmark tour playing some of the biggest headline shows of their career The Wombats will take over the bowl on Saturday 6th July. Their meteoric rise to become one of the country’s biggest guitar acts began 11 years ago with their platinum selling debut ‘A Guide to Love, Loss and Desperation’. Their recent album Beautiful People Will Ruin Your Life peaked at #3 in the UK album chart and received with glowing album reviews from The Times, Evening Standard, Metro, Sunday Times Culture, Daily Telegraph, DORK and more.

elbow make a hometown return on Tuesday 9th July following their arena tour earlier this year. Recognised as one of the UK’s biggest and most important bands, elbow have a well-deserved reputation for delivering shows that combine scale with intimacy to devastating effect. elbow’s story is one of the most extraordinary in contemporary British music.

Over twenty years and seven studio albums, elbow have achieved many of the accolades that mark out a successful band including three Ivor Novellos, a Mercury Music Prize and a BRIT award.

Following two sold shows at Manchester O2 Apollo as part of a huge worldwide tour in 2017, The National will make a huge outdoor return next year on Wednesday 10th July.

International pop superstar Kylie Minogue will be performing a career-spanning show from her unparalleled back catalogue on Thursday 11th July. Kylie’s recent shows as part of her ‘Golden’ UK arena tour have been met with widespread critical acclaim. Her latest album ‘Golden’ was released earlier this year via BMG Records.

It debuted at Number 1 in the UK Albums Chart and is her sixth Number 1 album to date. It has spent twenty weeks on the UK album charts and has spawned the singles ‘Stop Me From Falling’ and ‘Dancing’, the official video for which has over 11 million views and counting.

With the roar of their recent sold-out UK arena tour still echoing in their ears and more than one billion streams under their belts, The Kooks will be coming to the Bowl on Friday 12th July.

The band released their fifth studio album ‘Let’s Go Sunshine’ in the summer and saw them cement their status as true bastions of British guitar pop. With a legion of new fans The Kooks delivered a career defining show last year at London’s Wembley Arena, whilst pulling some of the biggest crowds across the summer festival circuits.

Ending the run of gigs, Haçienda Classiçal also returns with Manchester Camerata for its fourth event at Castlefield Bowl in what has becoming an annual and signature event for FAC 51 The Hacienda in its home city.

The clubbing classical cross-over concept has proved wildly successful and all the Castlefield dates have all fully sold out well in advance. Live support comes from Inner City who are playing their first UK concert in over twenty years

It’s going to be brass monkeys in Oldham this weekend