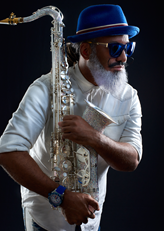 The Caribbean’s smoothest saxophonist comes to the UK this summer bringing a taste of carnival across the pond from Barbados. Tappin will once again take guests on a musical journey of the Caribbean islands, playing the smoothest in Jazz and reggae, thrilling the crowds at multiple venues across the country.

After forming his new band (#ArturoTappinBand), comprised of the best young, talented singers and musicians from Barbados, his team have developed a show that has taken them to every major festival across the Caribbean.

The excitement continues throughout 2018 kicking off at the Café Istanbul in Manchester (18th August), before heading to the Outhouse Pub for Edinburgh Fringe festival (20th – 26th August), followed by appearances at Holborn’s newest Pizza Express Live venue in London (30th – 31stAugust) and finishing the grand tour in Birmingham (1st September).

Besides touring, Tappin has served as the musical director for Eddy Grant as well as recorded with Grammy recipients Laylah Hathaway, Ralph MacDonald, and the late great Luther Vandross. Tappin has had the privilege of playing for two American presidents, Bill Clinton at the Governor General’s residence in Barbados and recently at the Fifth Summit of the Americas in Trinidad and Tobago for President Barack Obama.

In 2016 during a tour of the Caribbean, Arturo also got to play for His Royal Highness Prince Henry of Wales, (familiarly known as Prince Harry) in Antigua at the Invitation of Lady Williams (wife of the Governor General of Antigua).