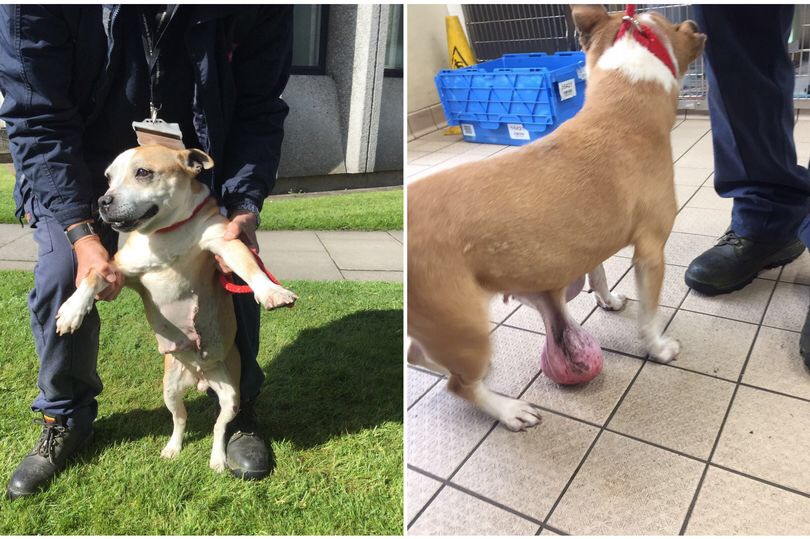 April the elderly Staffie was found abandoned in a Salford street with two huge tumours hanging from her stomach.
One was so large it was bleeding from dragging on the ground and, in a £400 operation funded by Rochdale Dog Rescue, took vets two hours to remove.

Luckily it turned out to be just non cancerous fatty tissue and Salford City Council dog wardens Erica Eaton and Will Harris say they can’t believe the change the operation has made to the dog they named April.
“We think April was abandoned from a car or van on Cholmondley Road near Lightoaks Park. Fortunately a lady spotted her in the road and picked her up straight away,” said Erica.

“We collected her from the RSPCA and feared the worst with the tumours being so large but we had to give her a chance. We think the tumours had been growing for months and she lost 1.5 kilos in weight when they were removed. 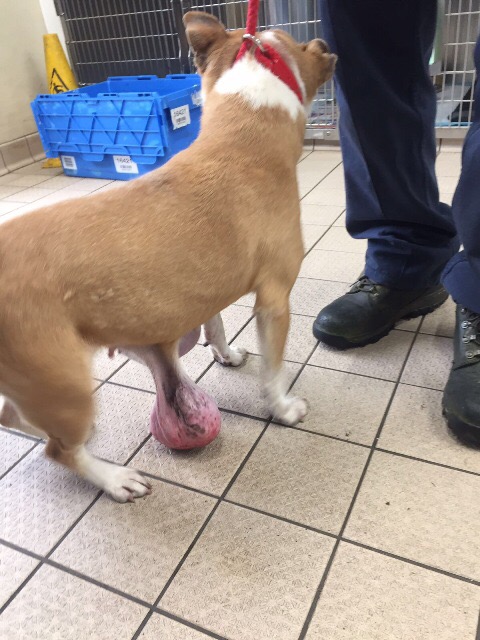 “She couldn’t jump up or stand on her back legs, she didn’t want to play and was subdued because of the pain relief and medication she was on but her tail never stopped wagging. She’s a lovely dog and everyone who has met her has been giving her a big fuss.”

The pair took it in turns to care for April in their own homes over the weekend before taking her to the vet for her operation yesterday (Wednesday April 27.) Both admit they left the vets with tears in their eyes and were relieved to hear the good news.

Will took the dog home again and after a good night’s sleep April jumped up onto the sofa and started to chase a ball in the garden.
“She was as good as gold and house trained. We think she has been someone’s family pet because she’s good with everyone including children and other dogs,” he said.

April, who needs further minor medical treatment, is now in a foster home and will be put up for adoption by Rochdale Dog Rescue.

“This kind of heartbreaking story is something our dog wardens deal with day in day out. Fortunately this time it had a happy ending. They really go above and beyond to care for dogs in Salford and I’m delighted to see April so happy and well,” he said.
Salford City Council dog wardens are staging the Dogs in Salford on Sunday June 22 at Clifton Country Park, Salford and all funds raised there will go to Rochdale Dog Rescue. Please see for details.

Creating a buzz-Bee-themed paper straws have been launched at bars and restaurants across Greater...