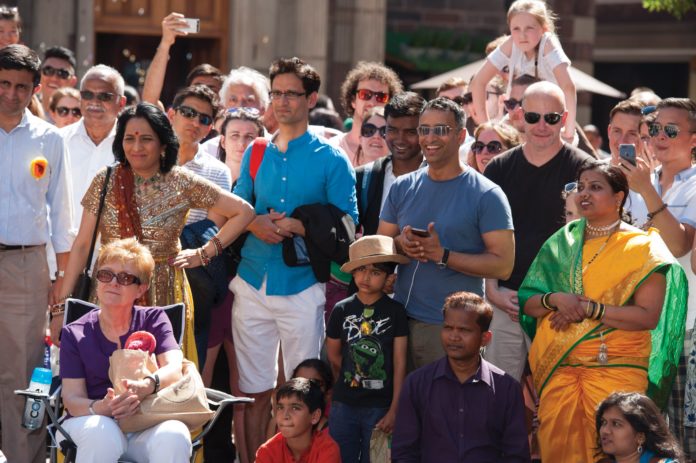 A symbol of peace that was carried 200 years ago by some of those that protested at Peterloo, is the inspiration behind the role of ‘Laurels’ – volunteers who will help to mark the anniversary of this watershed moment in British democracy on 16 August 2019.

The Laurels will play a central role in the public participation piece, From the Crowd, which will see an exchange in dialogue between 1819 and 2019. This performance piece will take place three times during the Peterloo 2019 Anniversary Event (12:30pm, 5.30pm and 8.00pm), with members of the public adding their voices to the live immersive experience; sometimes the voices of a few, sometimes the voices of hundreds.

Each Laurel will have responsibility for a number of audience members, helping them to take part in each hour long performance as it unfolds.

From the Crowd has been directed by Evie Manning (Common Wealth) and Robin Richards (Dutch Uncles) who have worked with communities and contributors including the Peterloo Ambassadors, Greater Manchester Coalition of Disabled People, These Walls Must Fall, Young Identity and Linda Brogan (playwright and artist) to create the words and music, which have been combined with the eyewitness accounts of those present at Peterloo in 1819. The result is a powerful, emotional, insightful piece that illuminates the importance of Peterloo both from a contemporary and historical perspective.

The Laurels will be at the heart of From the Crowd helping audience members to play their roles in bringing to life the words and narrative. Amongst those already confirmed as Laurels are a number of Peterloo descendants and the Peterloo Ambassadors.

Karen Shannon, CEO of Manchester Histories, says, “To mark a moment that involved over 60,000 people and ended in 18 people losing their lives and over 700 injured, it was important to the communities we have been working with that the day itself be an occasion led by the people. The Laurels will play such an important role, they will be there as members of the public themselves, to work with the audience and to remind all that Peterloo was a day when people came together to peacefully protest for rights and representation for all.”

To find out more about taking part in this once in a lifetime opportunity to become a Laurel, please email janine@manchesterhistories.co.uk.For further information on the events taking place on 16 August 2019 and across the Peterloo 2019 Anniversary Weekend (Friday 16 August – Sunday 18 August) visit www.peterloo1819.co.uk or to book tickets for From the Crowd visit https://fromthecrowd.eventbrite.co.uk.

First payments to be made from We Love Manchester fund