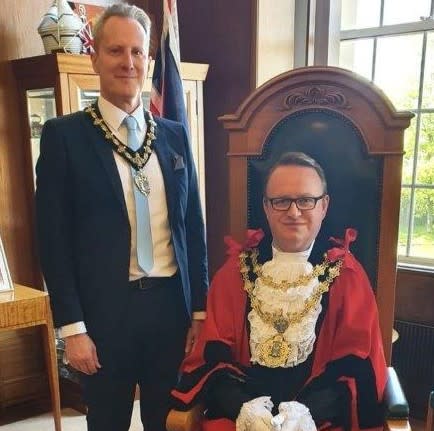 Prestwich councillor Tim Pickstone will be the first person in 70 years to be Mayor of Bury for a second consecutive term.

While several people have served as Bury’s ‘first citizen’ more than once in the town’s civic history, not since shortly after the Second World War has anyone held the post for two years in a row: Alderman W.K. Heaton, from 1949-51.

Cllr Pickstone has already made history – when he became mayor last May, he was the first to be elected by virtual video conference, because of the social distancing rules brought in to stop the spread of coronavirus.

Cllr Pickstone was elected to Bury Council in 2000, and for 16 years was leader of the Liberal Democrat group on the council.

The mayor has once again chosen Bury Samaritans to benefit from the Mayoral Charity Appeal, and will also continue to support the work of George House Trust, Greater Manchester’s HIV charity.

He said: “The last 12 twelve months have been a really difficult year for so many across the borough but it has been great to see first-hand, as mayor, the great work being done by so many people. Hopefully the coming year will be a bit better for all of us and it is such a huge honour to be asked to serve again as mayor at such an important time.”

Why Aye Pet-Manchester is now in the North East