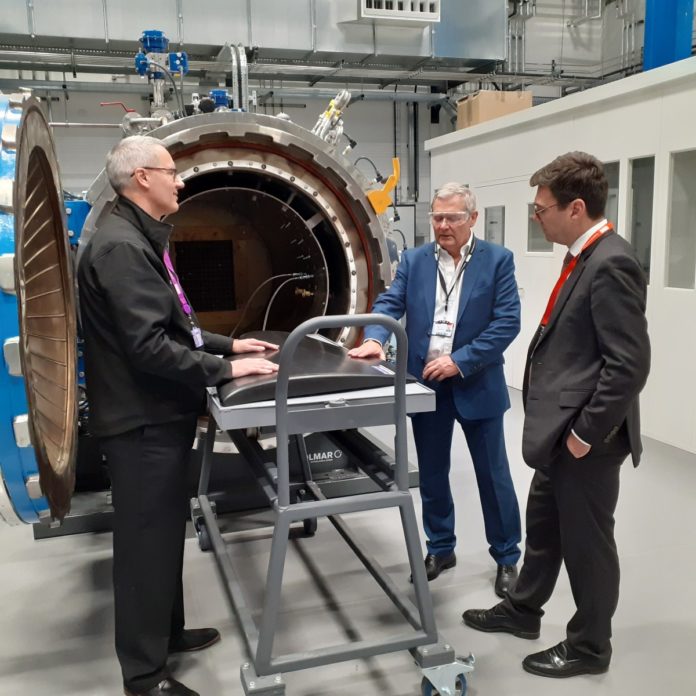 Andy Burnham, Mayor for Greater Manchester, made a fact-finding tour of facilities that are pioneering graphene innovation at The University of Manchester.

The Mayor toured the Graphene Engineering Innovation Centre (GEIC) which is an industry-facing facility specialising in the rapid development and scale up of graphene and other 2D materials applications.

As well as state-of-the art labs and equipment, the Mayor was also shown examples of commercialisation – including the world’s first-ever sports shoes to use graphene which has been produced by specialist sports footwear company inov-8 who are based in the North.

Andy Burnham – a running enthusiast who has previously participated in a number of marathons – has promised to put a pair of graphene trainers to the test and feedback his own experiences to researchers based at The University of Manchester.

Follow me on Twitter (opens in new window)
By collaborating with graphene experts in Manchester, inov-8 has been able to develop a graphene-enhanced rubber which they now use for outsoles in a new range of running and fitness shoes. In testing, the groundbreaking G-SERIES shoes have outlasted 1,000 miles and are scientifically proven to be 50% stronger, 50% more elastic and 50% harder wearing.

“Manchester is the home of graphene – and when you see the brilliant work and the products now being developed with the help of the Graphene@Manchester team it’s clear why this city-region maintains global leadership in research and innovation around this fantastic advanced material,” said Andy Burnham.

“I have been very impressed with the exciting model of innovation the University has pioneered in our city-region, with the Graphene Engineering Innovation Centre playing a vital role by working with its many business partners to take breakthrough science from the lab and apply it to real world challenges.

“And thanks to world firsts, like the graphene running shoe, the application of graphene is now gaining real pace. In fact, the experts say we are approaching a tipping point for graphene commercialisation – and this is being led right here in Greater Manchester.”