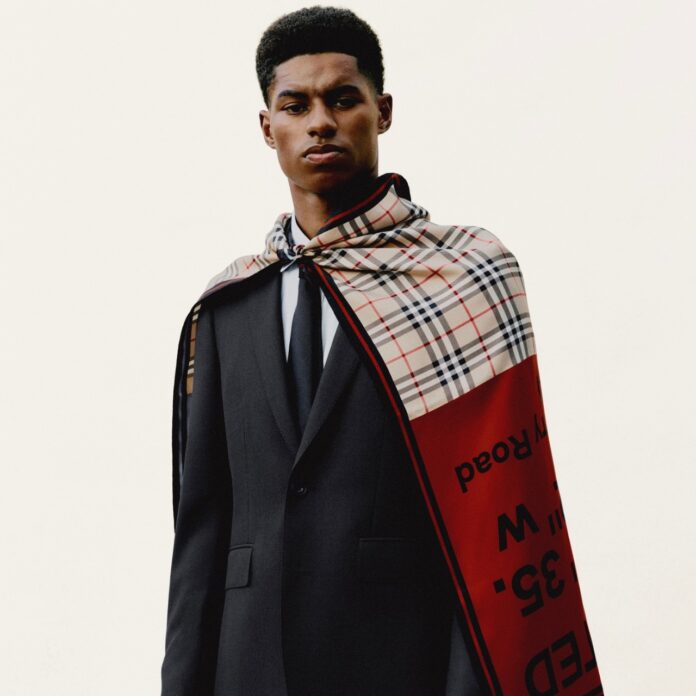 The Fashion retailer Burberry has announced a partnership with England and Manchester United striker Marcus Rashford to launch a new charitable initiative to support youth organisations in Manchester, London and New York.

Programmes range from education to supporting young creatives and artists, and helping entrepreneurs to tackle some of the world’s significant challenges. These outreaches will positively affect the lives of tens of thousands of young people across the world – encouraging and enabling them to achieve.

In London, Burberry is working with London Youth, which supports a network of over 600 community youth organisations and creates thousands of engaging opportunities for young people each year. Fifteen youth centres jointly selected by Burberry and London Youth will receive grants to ensure their programmes can continue to make a positive impact in some of London’s most deprived communities.

In Manchester, Burberry is supporting Norbrook Youth Club and Woodhouse Park Lifestyle Centre, which are both youth centres that played a pivotal role in Rashford’s childhood.

Youth volunteers from the two clubs will be coming together as part of the partnership to help charities in the Wythenshawe area where the clubs are based and Rashford grew up.

Alongside these youth centres, Burberry is contributing to Wide Rainbow, a non-profit based in New York City providing  access to the arts and arts education in neighbourhoods across the United States with little to no resources. The donation will provide art supplies, food deliveries and music education to young people in these communities as well as fund the creation of art murals to invigorate schools and shelters in New York and Los Angeles.

To further the international reach of this work, Burberry is partnering with the International Youth Foundation to contribute to the Global Youth Resiliency Fund. This will enable young entrepreneurs and community leaders, especially in Asia, to develop solutions to challenges including closing nutrition gaps and unlocking access to livelihoods.

In the summer of 2020, having raised £20 million in financial and food donations for food distribution charity FareShare, Rashford campaigned for the extension of holiday food provision to support 1.3 million vulnerable children affected by the global pandemic, U-turning a Government decision in just 36 hours. The campaign was driven via an open letter to all Members of Parliament in the UK touching on his own experience of child food poverty.

Rashford has since formed the Child Food Poverty Taskforce, bringing the biggest players in the European food industry together to stand united in finding a long-term sustainable framework to combat child food poverty across the UK and stabilise the households of millions of children.

In early October 2020, Rashford launched a Parliamentary petition for three child food poverty Government policy recommendations to be discussed via a votable moment in the House of Commons. On October 28, the petition became only the fifth in British politics history to exceed one million signatures.

In response to a lost Commons vote, Rashford mobilised the British nation to step up and support with feeding children most in need over the October school closures, with an overwhelming response.