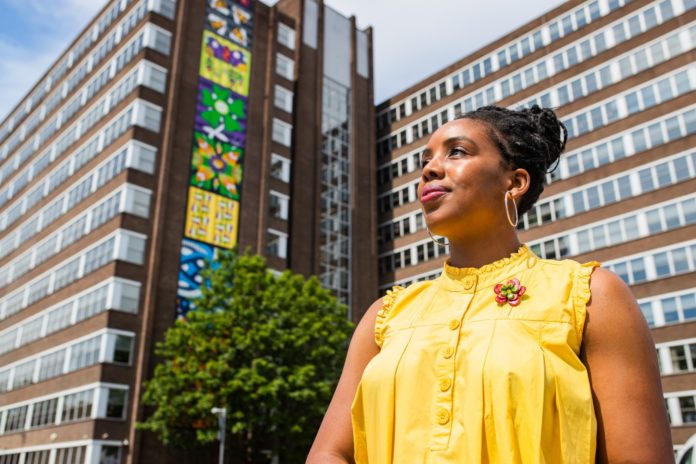 Bruntwood Works is celebrating the completion of a brand new Manchester mural, following the unveiling of a 38 metre high art work on its landmark Trafford House building.

The piece by local artist Venessa Scott was commissioned by Bruntwood Works and is one of the UK’s biggest permanent murals.

A vibrant celebration of the 2018 anniversary of suffrage, the artwork commemorates the sacrifice and spirit of the Suffragette movement, including that of women’s rights pioneer Sylvia Pankhurst, who was born metres from Trafford House.

The intricate mural is inspired by the area’s Pankhurst legacy, the suffragette colours, and the collaborative community in the Gorse Hill area.

Bruntwood Works held an anonymous global competition to select the artist to curate a mural and received entries from over 50 artists from as far away as Brazil. Entries were judged by a panel which included the BBC’s Director of the North and Children, Alice Webb; the Dean of Manchester School of Art, Penny Macbeth, and Bruntwood’s Director of Culture, Kate Vokes.

The bright and beautiful piece is situated on the East-facing end of Trafford House, on the major arterial route of Chester Road and Manchester City Centre, overlooking Manchester United’s Old Trafford football ground.

Venessa Scott said: “This design was created to reflect the principle of unity. It links directly to the pioneering work of Sylvia Pankhurst and the Women’s Social and Political Union and draws inspiration from the campaign banners created by its members.

“My aim was to create a tapestry of icons and designs that would remind and inform people about the rich history of the area, a design that would enliven its surroundings, start conversations, and inspire people by highlighting the amazing things that can be achieved by groups of people when they weave together in unity; much like Sylvia and the women she inspired.

“It’s been brilliant partnering with the Bruntwood Works team to bring this creation to fruition and to have had the opportunity to work on a piece on this scale exploring a theme which resonates so deeply with the local community.”

Kate Vokes, Director of Social Impact at Bruntwood, said: “It’s absolutely brilliant to see the finished piece – it’s a bold, beautiful artwork which interweaves the rich legacy of the suffragettes with a celebration of the collaborative Gorsehill community. Venessa is an incredible talent, with deep links to the area and she’s brought that passion for Gorsehill and its people to this project with amazing results.

“We hope this piece will bring a burst of colour to the community and serve as a visual celebration and tribute to the wonderful women who sacrificed so much and enabled the right of women to vote in elections. Art has such a key role to play in enriching and enlivening neighbourhoods and it’s been wonderful working with Venessa and the community in Gorsehill and Old Trafford to bring this project to life.”