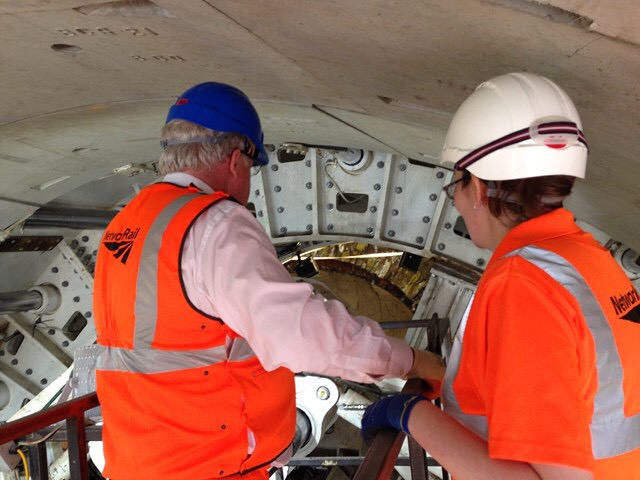 The biggest tunnelling machine in Britain has started work near Bolton as part of a Network Rail project to electrify one of north-west England’s busiest rail routes.
At 9m in diameter at its cutter head, Fillie the Farnworth tunnel boring machine is bigger than the machines used to build London’s Crossrail (7.1m), the Thames Tideway ‘super sewer’ (8m) and even the Channel Tunnel (8.8m).
Secretary of State for Transport, Patrick McLoughlin, visted the site yesterday (11 August) to see first-hand how the tunnel is being constructed and find out more about the benefits it will deliver.
The reconstruction of Farnworth tunnel is an important stepping stone towards creating an electrified railway between Manchester and Preston and is part of over £1bn of investment by Network Rail to improve rail services across the north; electrifying key routes, creating new rail links, improving stations and journeys.
Upgrading the railway through Farnworth posed a particular engineering challenge, as the twin tunnels which carry the railway under the main A666 Manchester to Bolton road aren’t big enough to accommodate the overhead lines which will power a new fleet of electric trains in future.
The solution is to keep one of the 270m-long tunnels open to trains, while the other – just 1.5m away – is pumped full of 7,500m3 of foam concrete before a completely new tunnel, big enough for two tracks and their overhead power lines, is re-bored through the new concrete by Fillie and her team of expert tunnelling engineers.
Nick Spall, from Network Rail, said: “The work we’re doing at Farnworth is part of a major upgrade to electrify one of the region’s busiest commuter routes. It will mean faster trains with more seats, giving passengers better journeys and boosting the economy.
“This is a once-in-a-lifetime opportunity to work on a project that is technically challenging but will also deliver big benefits for local people.”

Nick Donovan, managing director at First TransPennine Express, said: “Once this major improvement work is complete, faster electric trains will be able to run between Manchester, Bolton and Preston, bringing many benefits for people travelling through this busy route, such as more seats and quicker journey times. In the meantime, together with Northern Rail and Network Rail, we will continue to keep customers moving and informed while the work is underway.”