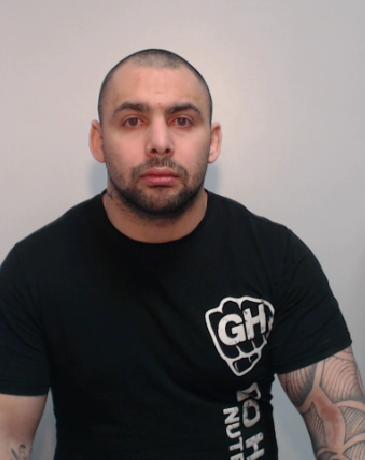 A Brinnington man who raped a woman before stalking and intimidating her has been jailed for 15 years today.

Lyndon Newman aged 31 of Blackberry Lane, Brinnington, was sentenced at Minshull Street Crown Court after being found guilty of rape and stalking involving alarm or distress.
He was also ordered to sign the sex offenders register for life and given an indefinite restraining order against the victim.

Over the course of a two week long trial, the court heard how sometime between June and August 2017 Newman forced himself on the victim – who is in her 30s – at an address in Hyde and raped her.

What followed over the coming months would be a campaign of intimidation against the victim as Newman bombarded her with threatening messages over the phone, in text and on social media.

On one occasion when the woman was visiting her friend’s flat, Newman turned up outside the property and started pouring the contents of a petrol can over the victim’s car. When she came out to confront him, he doused her in petrol too and threatened to set her on fire.

Thankfully the victim was able to placate Newman before he could take things any further.

Detective Constable Louise Isherwood, of GMP’s Tameside borough, said: “Not only did Newman subject his victim to a terrifying ordeal when he raped her but he then continued to make her life a misery as he led a campaign of intimidation against her.

“Dangerous people like Lyndon Newman deserve to be locked up and it brings me great satisfaction to be able to say that his victim can now breathe easily as he spends the next 15 years in prison.

“She has shown an incredible amount of courage in coming forward to police despite the threats of this animal and I want to pay tribute to her for that.

“Her bravery has led to a devious predator being taken off the streets and put behind bars where he is unable to hurt any other women.”