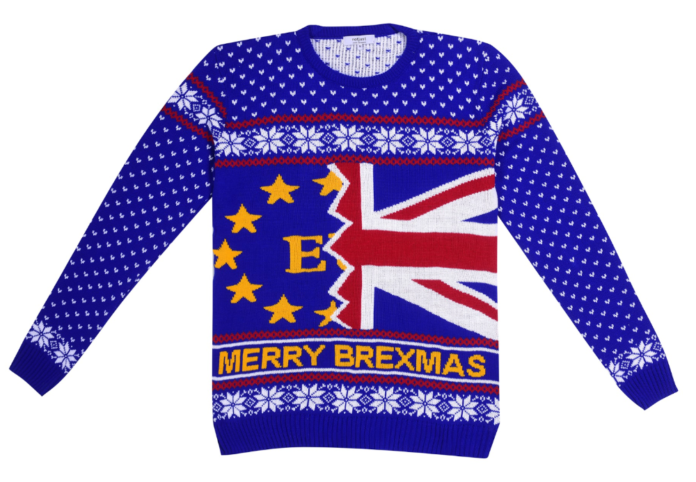 With the December general election announced and Brexit delayed once more, social enterprise notjust – who have raised more than £30,000 in charity donations since launching in 2017 with their viral Jerry Christmas knit – are giving the people what they want, with the world’s first Christmas Jumper Referendum.

This festive season, join the debate with notjust’s Leave and Remain Brexit knits. Never has something shaped the national discourse so much in our lifetimes; whether you’re in or out, everyone’s got an opinion. So cast your vote in notjust’s people’s referendum by purchasing your Leave or Remain knit, so we can report a true reflection on the nation’s view on Brexit this Christmas, with final results posted on Wednesday December 11.

10% of profits from all jumper sales will be donated to a charity of the customers’ choice, ensuring everyone can do their bit this holiday season. Each jumper is produced domestically in the UK in fair and ethical working conditions, supporting the local economy while keeping carbon emissions to a minimum.

The unisex Christmas jumpers, which cost £34.99 are for the merry not the few, available in XS-XXL. In the lead up to the election voters will also be able to show their support for the two front running party leaders through the famous Jerry Christmas jumper and a Boris Johnson-inspired knit that will be launching soon.

Mike Harding, Founder of notjust said: “We’re back again for our third year and we’re kicking things off with a festive-fuelled People’s Vote, because what else says Christmas like a good old fashioned political debate? The nation’s leaders haven’t put it to the people, so we’re doing it for them – whether Brexmas means Brexmas, or you think we’ve gone crackers, get your votes in and have your voice heard ahead of the general election. We hope this knit creates a bit of healthy discussion around the Christmas table and inspires a few laughs along the way!

“We create everything domestically in fair and ethical working conditions, keeping our carbon emissions down and to provide jobs to the local community. We want to empower our customers to give back by donating funds from their purchase to a charity of their choice, so as well as looking great at their Christmas party they know they’ve also had a positive effect on society.”

So get yourself to the North polling station and have your say in the Christmas Jumper Referendum.

notjust’s entire brand new 2019 collection will be released on Monday 4 November, celebrating the best of Britain alongside a special range created in partnership with Save the Children in order to raise a minimum of £50,000 for the charity ahead of Christmas Jumper Day (Friday 13).