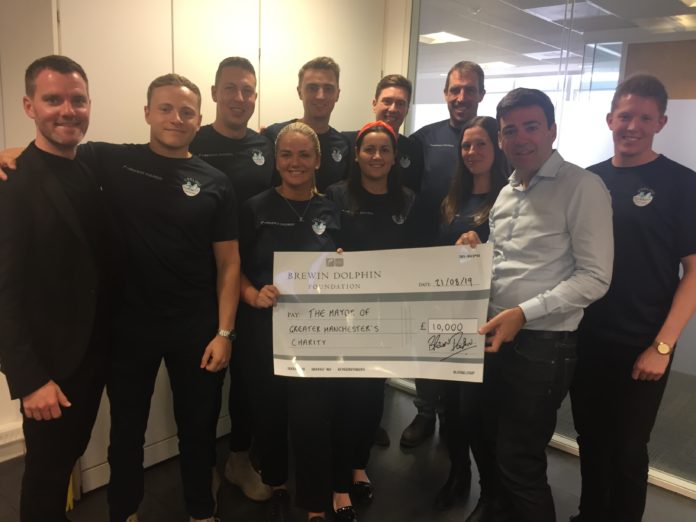 A team from Brewin Dolphin’s Manchester office recently successfully completed the National Three Peaks Cycling Challenge, climbing the three highest mountains in the UK: Snowdon, Scafell Pike and Ben Nevis, and cycling the 430 miles in between.

They did this under the name of ‘Cycling for Summit Good’, and raised an impressive £10,000 for The Mayor of Greater Manchester’s Charity.

The Brewin Dolphin team completed the challenge as a way to raise funds and awareness of homelessness in Greater Manchester and for all those who have no choice but to sleep on the streets.

The team presented a cheque for £10,000 to Andy Burnham, the mayor of Greater Manchester (pictured). The money raised will be put towards helping Greater Manchester’s homeless people with food, a place to sleep, and general care.

Richard Morley, senior investment manager, Brewin Dolphin Manchester said: “Over the course of the challenge we had some lows with bike breakages and tired bodies, but mostly it was highs. We encountered so many lovely people along the way and the scenery was incredible.”

Lancashire Wildlife Trust & Standby team up for spring to promote ecotherapy projects for...