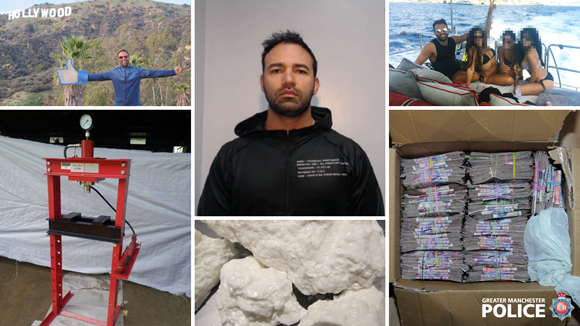 A Bowdon man funded his luxury lifestyle with fraud, money laundering and drugs has been sentenced to 37 years behind bars.

The court heard how Sheibani was involved in high level criminality which has enabled him to build substantial unaccountable wealth which includes a portfolio of properties worth around five million pounds.

He has spent a number of years purchasing, re mortgaging and selling properties in the UK and Spain which the court believe is an attempt to complicate and frustrate law enforcement and other agencies from fully understanding the basis of this wealth.

Evidence shows that Sheibani obtained properties by fraud, masquerading as a legitimate businessman whilst falsifying his earnings to facilitate further borrowing. Recorded earnings for Sheibani show that his tax records are incomplete with a number of years where he has failed to file a tax return or declare any income, profits or capital gains, resulting in no evidence of any legitimate income to lawfully explain the amount of cash he has acquired.

He produced forged documents to support his false declared earnings with documentation being found to contain forged bank statements, payslips and P60s.

Financial investigation into Sheibani’s bank accounts shows that the majority of his wealth comes from cash deposits and overseas money transfers, and he has been in receipt of third party credits.

Evidence shows that Sheibani used third party individuals when purchasing a number of properties which were later transferred to him for no monetary consideration, which the court accept as a technique used by Sheibani to clear his tainted wealth and disguise his involvement in this money laundering.

In April 2019, a number of addresses connected to Sheibani across Manchester were searched and London and he was arrested on suspicion of money laundering and fraud.

Sheibani attempted to delay efforts by police to secure access to his apartment by refusing to answer the door as he attempted to destroy evidence. Police were finally able to gain access by forcing their way into the apartment through a communal door. As police escorted Sheibani from the building, he shouted to his girlfriend “don’t tell them anything, go no comment.”

A safe was recovered from the property which contained over £160,000 in cash, a number of safety deposit keys, crypto currency recovery codes and cocaine. A Porsche Panemera, valued at £24,000, was also recovered and further searches of the apartment found a number of mobile phones – including two encro phones with military grade encryption to prevent unauthorised access to any data stored on the devices.

Two of these phones – one of which was one of the encro phones – were found smashed and submerged down the toilet in an attempt by Sheibani to destroy evidence.

Searches of his other properties and the safety deposit boxes also found cash counting machines, various quantities of foreign currencies, an encrypted iron key USB – designed to be completely tamperproof, a number of electronic devices, a substantial amount of class A and B drugs, including Cocaine, Ketamine and Ecstasy, and a number of original artwork pieces – including those by artists such as Banksy and Andy Warhol – which were later found to be obtained through illegitimate means.

Overall, these warrants resulted in the recovery of £1.2 million of cash, property to the value of £5 million and crypto currency valued at £1.5 million.

During police interview, Sheibani was asked for the PINs and passwords for the recovered encrypted electronic devices and iron key USB, however he refused to provide these, even when served with a specific court order requiring him to disclose this information.

The court were presented with evidence that police were able to recover from a number of Sheibani’s other electronic devices, bank records and online shopping accounts as well as hearing how he has previously been the subject of two airport stops when flying back from Ibiza which resulted in the seizure of over £42,000 of cash. The court has accepted this evidence as confirmation of Sheibani’s involvement in conspiracy to supply class A drugs.

He was today sentenced to 34 years for the charges, and an extra three years to be served consecutively after failing to provide the password to his devices.

Sergeant Lucy Pearson, of GMP’s Economic Crime Unit, said: “Sheibani is a calculated, deceitful and scheming criminal who believes he is above the law. His greed shows no limits and he has been funding his materialistic lifestyle of luxury with fraud and criminality, masquerading as a legitimate businessman to conceal his ill-gotten gains.

“He is a dishonest individual who has not shown any remorse for his actions throughout this entire investigation, refusing to co-operate with police and attempting to destroy evidence.

“The extent of Sheibani’s criminality should not be underestimated, not only is he involved in tax evasion and money laundering which has a detrimental effect on the economy and society, resulting in honest tax payers feeling that burden, but the source of his tainted income is as a result of a class A drugs conspiracy.

“This has been a complex investigation which has included a number of international enquiries and I would like to thank the dedicated team of GMP detectives and financial investigators who have working alongside CPS to gather all the evidence which has allowed us to expose Sheibani’s fraudulent lifestyle and the criminal activity he had tried so hard to conceal, and ensure he faces justice.

“May today’s sentencing serve as a warning to anyone thinking they can get away with such fraudulent and criminal activity, we will find you, and ensure that you face the full consequences of your actions.”

These six puppies have been stolen from a house in Rochdale