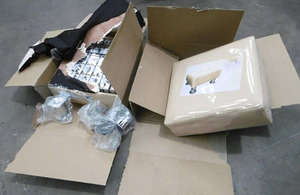 An attempt to smuggle more than a million cigarettes into the UK hidden in foot stools was prevented by Border Force at Manchester Airport.

The force discovered the cigarettes in 6 separate seizures between 23 December 2017 and 2 January 2018.

Each consignment was listed as foot stools, but when officers examined the furniture they found hundreds of packets of cigarettes, branded as Lambert and Butler but suspected counterfeit, hidden in the void beneath the cushions.

Had the smuggling attempts proved successful it could have cost the Treasury approximately £375,000 in unpaid duty and VAT.

All of the consignments came from China.

These significant seizures, 1,012,800 cigarettes in total, are testament to the expertise of Border Force officers who are working every day to prevent illegal importations, no matter how well they are concealed.