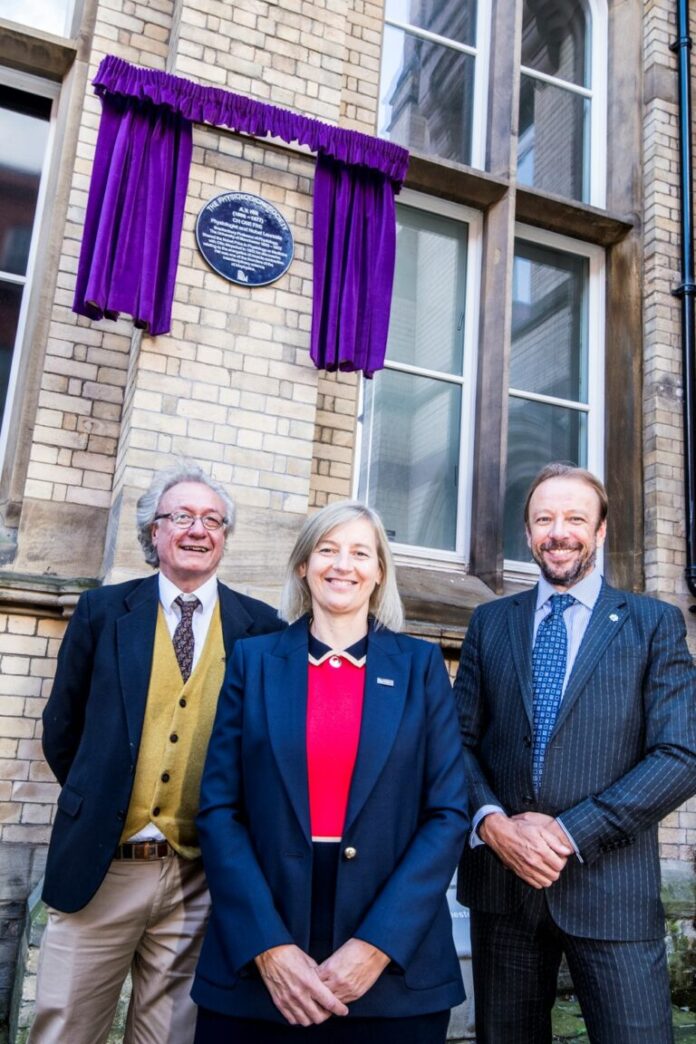 AV Hill, a British physiologist, was one of the founders of the disciplines of biophysics and operations research. He was the Brackenbury Professor of Physiology at Manchester University from 1920 – 1923, and was awarded the Nobel Prize for Physiology or Medicine in 1922, aged just 36. The Nobel Prize was awarded for his studies on the production of heat and mechanical work in muscles. Hill introduced the concepts of maximal oxygen uptake and oxygen debt.

Speaking after unveiling the plaque, Professor Graham Lord, Vice-President and Dean of the Faculty of Biology, Medicine and Health at the University of Manchester said:

“As the Vice-President and Dean of the Faculty of Biology, Medicine and Health, I am honoured to unveil this Blue Plaque to recognise AV Hill. It gives me great pleasure to recognise a scientist who contributed so much to the discipline of physiology and to our own history here in Manchester.”

“As an Honorary Member of The Physiological Society, I am delighted to announce the unveiling of the AV Hill blue plaque at The University of Manchester. AV Hill was an exceptional scientist and an even more exceptional human being. Among his many achievements he was one of the founders of biophysics, a Nobel Prize recipient at age 36, a life-long humanitarian who played a crucial role in the war effort, and a dedicated ambassador for the discipline of physiology. The Physiological Society and The University of Manchester are proud to honour him in this meaningful and permanent way to help preserve his legacy for future generations.”

“The Physiological Society is delighted to be celebrating the tremendous achievements of AV Hill. It is particularly special to be unveiling our plaque at the old medical school where AV Hill worked. Hill was a pioneer in physiology, being awarded the Nobel Prize at just 36 years old for his discovery relating to the production of heat in muscle. His work laid the foundations of the discipline of biophysics.

“Alongside his scientific research, Hill had an active role in both World Wars, acting as a government scientific adviser before and during the Second World War.

“A life-long humanitarian, Hill worked with Ernest Rutherford and William Beveridge to establish the Academic Assistance Council, which helped scientist victims of Nazi persecution at a time when the events in Germany were not known to the majority of people in the UK. This organisation helped a thousand scientists escape, including 18 who went on to win Nobel Prizes.”

Retirement for the GMP quartet that kept the wheels turning