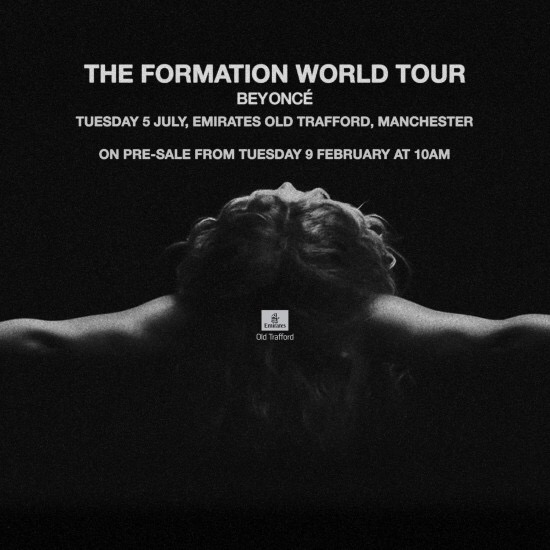 The venue will be staging a second concert this summer with global pop sensation Beyoncé performing live at the venue on Tuesday 5 July.

The American superstar follows on the heels of fellow chart topper Rihanna, who will play at the home of Lancashire County Cricket Club on Wednesday 29 June.

The highly-anticipated Formation World tour, promoted by Live Nation, presented by American Express and produced by Parkwood Entertainment, will kick off in North America on April 27 in Miami at Marlins Park with 21 additional stadium dates lined up throughout the United States. Old Trafford will be one of only five venues in the UK to welcome Beyoncé.

The former Destiny’s Child singer became a solo artist in 2003 with the release of her debut album Dangerously In Love, which established her as a solo artist worldwide, earned five Grammy Awards and featured the hit number-one singles Crazy In Love and Baby Boy.

The Texan has released five albums and has also starred in several Hollywood films. At the weekend she performed in front of a live global audience of more than 115 million during the half time show at the Super Bowl 50.

Lancashire County Cricket Club’s Chief Executive, Daniel Gidney, said: “We are delighted to be hosting two of the world’s greatest female artists at Emirates Old Trafford within the space of a week where in the region of 100,000 guests will have a fantastic time watching both Rihanna and Beyoncé.

“To have two such renowned stars performing at Emirates Old Trafford, following on from last year’s sold out Foo Fighters concert, firmly underlines our reputation as a world class, multi-purpose sporting, entertainment and conference and events venue, which can cater from as few as five people all the way up to 50,000.”

Tickets go on pre-sale from Tuesday 9 February at 10:00am via www.livenation.com with any remaining tickets going on general sale from 9:00am on Tuesday 16 February (Please note: there will be a limit of eight tickets per person).

Daniel added: “2016 promises to be an exciting year at Emirates Old Trafford with Lancashire Lightning defending our NatWest T20 Blast title. There is also a summer of international cricket with England hosting Pakistan in an Investec Test match and a one-off NatWest International T20 which will feature our very own superstar Jos Buttler.

Travelling by rail over Easter weekend- Read this first