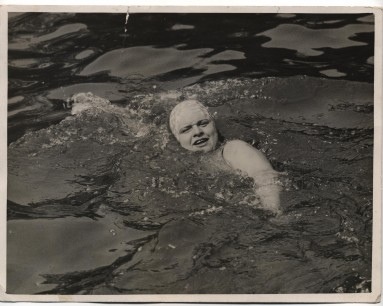 The first women to swim the English Channel is to have a street named after her in East Manchester.

Longsight born Sunny Lowry was a keen swimmer from a young age who trained at Victoria Baths, Levenshulme Baths, and taking part in competitions at Lake Windermere. She also swam long distances in the sea near her family’s holiday home at Rhos-on-Sea, North Wales.

She would recall with a fit of giggles having to walk in file with the other girls to their places to compete in the galas at Victoria Baths, the Males 1st Class cubicles had no curtains and the men and boys were in various states of undress, so the girls’ trainer would tell them to turn their heads the other way

Sunny completed her Channel swim on the third attempt in August 1933 at the age of twenty two after being thwarted by difficult currents on the first two occasions.She set off from Cape Dis Griz in the dark emerging five teen hours and forty one minutes from a rough sea at St Margaret’s Bay, near Dover, covered in grease, her face and neck were swollen with jellyfish bites, and her lips were cracked and blue and wearing a daring for those days two-piece costume.

Sunny was second cousin to Lawrence Steven Lowry, her father had been a fishmonger and she attended Manchester High School for Girls which today proudly displays photos of one their most famous pupils.She would later recall that the headmistress Miss Clarke “was a rather stern woman, and she looked at me from over her half-moon glasses and said, ‘Lowry, what is your ambition?’ I replied immediately, ‘To swim the Channel’, and she said without another word ‘Dismissed’.”

When she returned to Manchester after conquering the channel, she was met by huge crowds at the former Central Station.

In her latter years she was President of the Channel swimmers association, would present a gold medal to the Australian swimmer Ian Thorpe at the 2002 Commonwealth games and would be awarded the MBE in 2006.