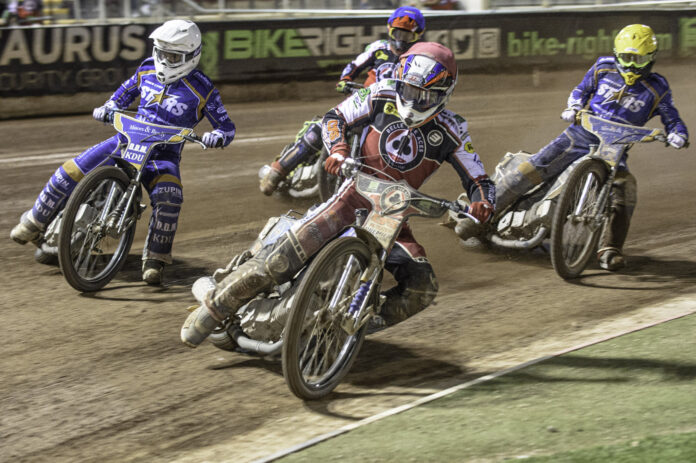 BELLE Vue are on the cusp of sealing their place in the 2021 Premiership top four thanks to a superb 48-42 victory over the King’s Lynn Stars at the National Speedway Stadium.

The stakes were high going into Monday night’s clash, with such fierce competition continuing to escalate in the build-up to the Play Offs, coming in the next couple of months.

Only a win would suffice against the Stars to take some of the pressure off the BikeRight Aces ahead of their last few remaining scheduled fixtures, and they didn’t disappoint.

But the opponents were not about to make it a cakewalk for the home team and were quick to assert themselves and maintained a strong offensive from start to finish.

The BikeRight Aces likewise presented a united front against King’s Lynn, and once they established a lead, they pressed home their advantage with little to no trouble.

Brady Kurtz was delighted to be back in the double figures after some mid-season struggles, scooping 11+1 on the night while Dan Bewley led the score charts with 12.

Returning BikeRight Aces reserve Jye Etheridge said: “It was a tough one for us, King’s Lynn had nothing to lose and they absolutely didn’t make it easy for us.

“A few of their lads were here last week for the British Final and were already quite dialled in, and they really pushed us from start to finish.

“It’s great to get back to winning ways at home and now that we know we’ve almost made the Play Offs there’s a little bit of pressure off the boys ahead of the Wolves meetings.

“It’s a good opportunity now to try a few new things with the bikes, but at the same time we still want to go out and get as many points from our remaining meetings as possible.”

The BikeRight Aces return to the National Speedway Stadium on Bank Holiday Monday, against the Wolverhampton Wolves – tapes up at 12pm – before heading to Monmore Green at 8:00pm.

Tickets for all our home meetings are now available, unrestricted, at bellevue-speedway.com and we encourage our supporters to buy in advance where possible.

Aces even the score