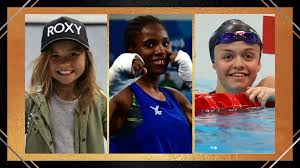 Skateboarder Sky Brown, 11, hopes to become Britain’s youngest ever summer Olympian next year. And she will be seeded for the qualifying events for the Tokyo Games after winning bronze at the Park World Skateboarding Championships in Sao Paulo, Brazil. Also this year she claimed gold at Simple Session, a senior women’s competition in Tallin, Estonia on a park course designed for men twice her size.

Boxer Caroline Dubois, 18, is a Youth World and Olympic champion and this year won lightweight gold at the Youth European Championships for an incredible fourth time. Her victory in the final was her 40th straight victory across all competitions. The younger sibling of British and Commonwealth heavyweight champion Daniel Dubois is England’s most successful female youth boxer ever.

The winner will attend the BBC Sports Personality of the Year awards on 15 December at the P&J Live arena in Aberdeen.

BBC Sports Personality of the Year takes place on Sunday 15 December at 7pm live on BBC One.