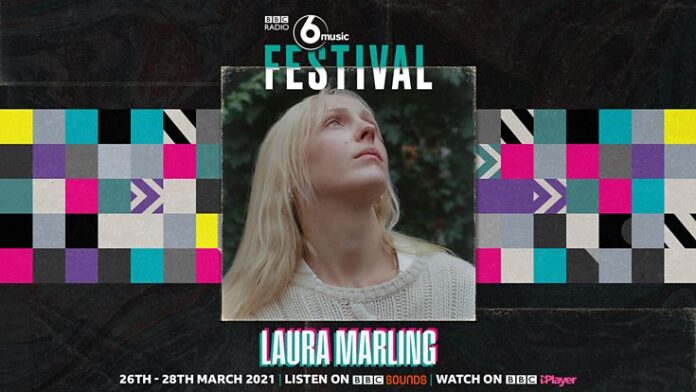 As announced on Lauren Laverne’s 6 Music Breakfast Show , the 2021 festival will see nine brand new performances and 18 classic sets from festivals past made available on BBC Sounds and BBC iPlayer, with highlights broadcast on 6 Music and BBC Four, treating listeners and viewers to an eclectic mix of musical performance, when they need it most.

These brand new sets will be made available in full on BBC iPlayer and BBC Sounds from Friday 26 March, with highlights played out on 6 Music between Friday 26 and Sunday 28 March.

Tracks from Michael Kiwanuka, Laura Marling and Bicep’s performances will also be shown on BBC Four at 11pm on Friday 26 March. Songs shown will include You Ain’t The Problem by Michael Kiwanuka, Song For Our Daughter by Laura Marling and a special track from Bicep. The programme will also feature Cerys Matthews interviewing Michael, and Laura about being able to finally perform in a live venue after a year of restrictions, all be it with no audience yet.

Samantha Moy, Head of BBC Radio 6 Music, says: “With venues closed across the UK, we are determined to celebrate live music, as we know 6 Music listeners are missing gigs as much as we are. So, we’ve raided the 6 Music Festival archives and moved heaven and earth to record some new performances, to ensure that the festival will go on!”

Laura Marling says: “Really looking forward to sharing the songs I performed at Alexandra Palace – thank you BBC Radio 6 Music for inviting me.”

Michael Kiwanuka says: “It feels great to be playing the 6 Music Festival this year, especially because I missed last year – I was so sad and gutted not to perform. This year is a special year because there are very few opportunities to get to play live, with the situation we’re in in the world. So it’s great to be able to express myself the way I know how and with the 6 Music family. It means a lot.”

The following classic sets will be made available across BBC Sounds from Monday 22 March, with many also available to watch in full on BBC iPlayer:

BBC iPlayer will also present an eight-hour stream of back-to-back new and classic sets from 2pm to 10pm on Sunday 28 March.

In addition, they can catch Laura Marling in conversation with Matt Everitt in a 6 Music Festival special of The First Time With… (Sunday 28 March, 1pm-2pm). Listeners and viewers can join the conversation on social media as Now Playing @6Music (Sunday 28 March, 6pm-8pm) unites with BBC iPlayer for a special simulcast of Depeche Mode’s 2017 set at Barrowland Ballroom in Glasgow, when they returned to the venue for the first time since playing there 33 years previously.

6 Music presenters will also re-play memorable moments from festivals past in their shows, in the lead up to and across the main festival weekend. Lauren Laverne will look back at Q&As with Kelis (Manchester, 2014) and Little Simz (Liverpool 2019). Mary Anne Hobbs will replay moments from 6 Music festival interviews with Jehnny Beth (Camden, 2020), Anna Meredith (Camden 2020), and Tricky (Bristol, 2016). Shaun Keaveny will broadcast highlights from Matt Everitt‘s interview with Ed O’Brien (Camden, 2020). Cerys Matthews will revisit her interview with poet Roger McGough (Liverpool, 2019), Loyle Carner, who is sitting in for Guy Garvey will throw back to Kojey Radical in conversation with Mary Anne Hobbs (Bristol, 2016), as well as Kae Tempest in conversation with Eliza Carthy and Mark Radcliffe (Tyneside 2015). Amy Lamé will relive her interview with Charlotte Gainsbourg (Liverpool, 2019).