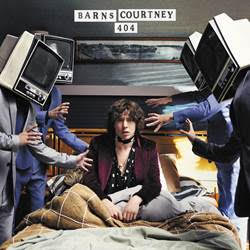 Fresh from his European headline tour, global rising star, Barns Courtney today announces his second studio album ‘404’ which is set for release on September 6th via Virgin EMI. To mark the news, Barns has unveiled a brand new single and video called ‘You & I’.

The album will feature 10 new tracks and will explore his transition into adulthood with conflicted feelings of loss, frustration and optimism. Fans can expect to hear his deep vocals bringing adding an energy to a mixture of intense rock grooves and softer melodic sounds. Recorded in the middle of the night, the vocals were recorded in only one take and are largely improvised. It is perhaps Barns’ most raw and intimate work yet as he invites listeners into some of his deepest thoughts.

Speaking about the album, Barns says: “The album circulates around the themes of existential authenticity, and how we lose ourselves as we age. A 404 error is when a computer can’t find what it’s looking for. It connects with the server but the page isn’t there anymore. As a child of the digital age, the comparison felt apt. And although in some ways, our former lives still exist inside of us, they’re ultimately hollow shells of what they once were, living breathing experiences. We can follow the links to our past, but there’s nothing there. It’s a painful realization and one that fascinated me whilst writing the record in my friends’ old bedroom in the backwaters of Yaxley where we first started almost 10 years ago.”

Barns’ forthcoming album follows the successful 2017 debut album The Attractions Of Youth, which saw him become a viral hit with singles ‘Glitter & Gold’ and ‘Fire’ reaching popularity on both sides of the Atlantic. He performed on popular US late-night talk shows such as Conan O’Brien and The Late Late Show with James Corden as well as receiving support from Rolling Stone magazine.

To date, Barns has landed over 300,000 global album sales, more than 470 million global streams and 45 million YouTube views. More recently, his last single ‘99’ peaked at #5 on the US Airplay charts and received support from BBC Radio 1 DJ, Annie Mac who described it as “a cross between Kings Of Leon and MGMT”.

On the live circuit, his electric and unmissable shows earned him a completely sold out UK and European tour in 2018 which included iconic London venues such as Heaven, Dingwalls and Scala. Having previously opened for industry heavyweights such as The Who, Blur, The Libertines, Ed Sheeran, The Kooks, The Wombats and Elle King, and with a European tour already under his belt this year, fans will get to see his incredible performance in the UK and Europe this autumn.

Head for the bottomless Brunch at Revolución de Cuba this weekend