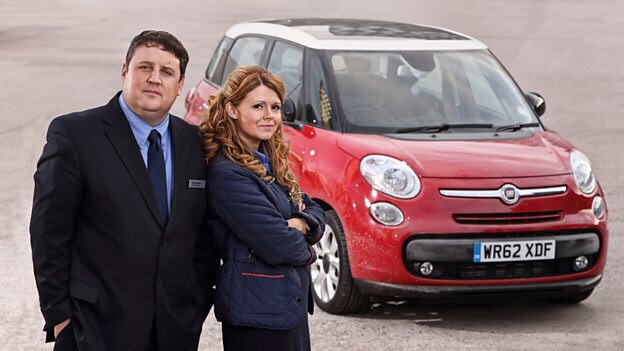 After a record-breaking first series which premiered exclusively on BBC iPlayer in 2015, Peter Kay and Sian Gibson will be back in 2017 to continue their partnership as colleagues John and Kayleigh who found themselves united in their journey to work by a company car share scheme.
Set and filmed in the North West, Car Share remains the most-watched new sitcom since 2011. Series one climaxed with a ‘will they won’t they’ pivotal moment between John and Kayleigh as their chemistry grew and it looked like romance was on the cards. The soundtrack to their friendship (courtesy of fictional local radio station Forever FM) was sealed with a mix CD from Kayleigh to John, but what will become of their blossoming relationship?

Peter Kay says: “What a joy to be working on the second series of Car Share with the wonderful Sian Gibson. The success of the first series has been completely overwhelming.”

Car Share was the first-ever series to premiere on BBC iPlayer in its entirety before a linear transmission. As a box set, it received three million iPlayer requests in its first four days alone, before the series transmitted on BBC One to over six million viewers and huge critical acclaim as its haul of awards nominations and wins attests.

Sian Gibson says: “I’m really excited that Car Share is coming back. We had so much fun making the first series and I can’t wait to be Kayleigh Kitson again.”

Commissioned by Charlotte Moore, Controller, TV Channels and iPlayer, and Shane Allen, Controller, Comedy Commissioning, series two is written by Paul Coleman, Sian Gibson and Peter Kay, who also directs. It will once again be produced by Gill Isles for production company Goodnight Vienna. The series is 4×30’ and will premiere in its entirety on BBC iPlayer.

Charlotte Moore says: “Car Share broke the mould, innovated and took risks in comedy on primetime BBC One – a show that epitomises what the channel is all about. I can’t wait for the Bafta-award-winning series to return, and discover where Peter Kay and Sian Gibson take those gorgeous characters that the nation fell in love with.”

Shane Allen says: “There is so much more to explore between John and Kayleigh in their journey together each day and in life. The writing on the new series is sublime – intimate, poignant and hilarious. With Peter Kay and Sian Gibson at the wheel, the audiences are in for another fantastic treat.”