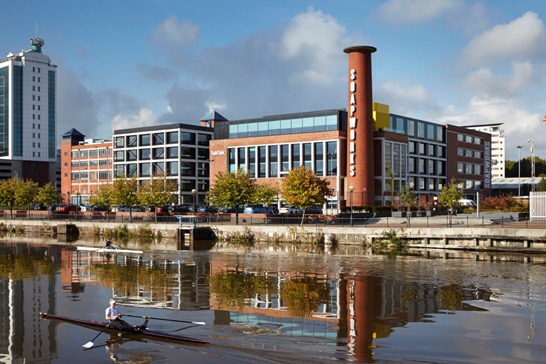 Manchester’s Soapworks development on Colgate Lane, Salford Quays has today been recognised as one of the best workplaces in the North of England at the annual British Council for Offices (BCO) regional property sector awards.

The prestigious BCO awards programme recognises the highest quality developments and sets the standard for excellence in the regional and national office sector.

Soapworks was named as the Best Refurbished & Recycled Workplace in the North of England. Only minutes away from Manchester city centre, the formally neglected factory now houses desk space within a regenerated environment. The former Colgate Palmolive Factory underwent a stunning transformation and now offers unique office space to each of its residents. Set amongst over 200,000 square feet of commercial space, the development incorporates a landscaped courtyard that includes pedestrian linkages through to a beautiful waterfront setting.

Judging Chairman, Andrew Woodhouse of Mott MacDonald, said: “The winners of the BCO Northern Awards are all ambitious projects that have been hand-picked from a selection of top quality entries. Entries were judged on a range of different factors including flexibility, sustainable construction, architectural flair and above all their effectiveness as a workplace. All winners should be proud to emerge as one of the best workspaces in the region.”

Richard Kauntze, Chief Executive of the BCO, commented: “This year’s awards are testament to the quality and distinction of new office development in the North of England. The Soapworks is a brilliant example of a unique and ambitious regeneration project, moments from the heart of the city. Alongside the other buildings recognised at this year’s awards, the Soapworks sets a standard for future projects around the UK.”

Other workplaces across the North of England that received recognition include The Core in Newcastle which was awarded Best Commercial Workplace, The Hiscox Building which took home the award for Best Corporate Workplace, while the Bunker development in Liverpool picked up the award for Best Project up to 2,000m2. Berghaus HQ in Sunderland and the Thirteen Group in Stockton-on-Tees were also named as joint winners of the Best Fit Out of Workplace category.

Regatta HQ in Manchester’s Mercury Way was also put forward as the North’s nomination for the prestigious BCO Innovation Award, which will be announced at the BCO National Awards in October.

This is the thirteenth year the Regional Awards have been presented locally in the North of England, celebrating excellence in office space regionally, before all winners go on to compete at a national level at the National Awards on Tuesday 4th October.