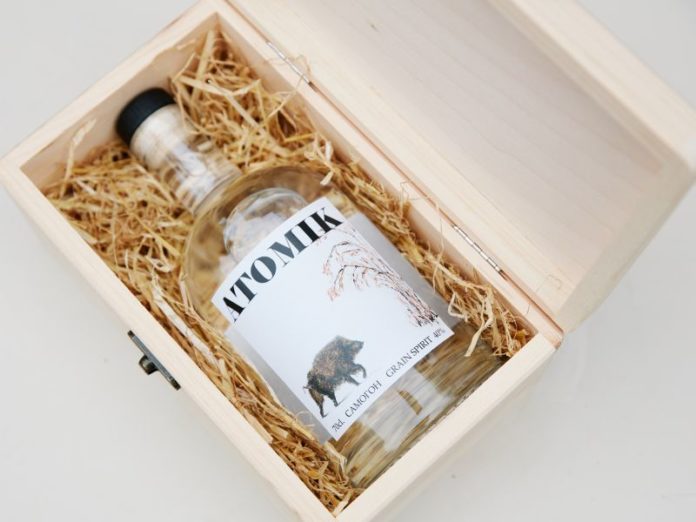 A radioactive-free vodka produced from crops in Chernobyl’s abandoned zone has been brewed by a team of scientists.

Professor Jim Smith, at the University of Portsmouth, described the artisan vodka – branded ATOMIK,as possibly the most important bottle of spirits in the world.

He and colleagues in Ukraine, where is was traditionally brewed, hope it will help the region recover economically.

In a report released today, Professor Smith and colleagues in the UK and Ukraine present the results of a three-year research project into the transfer of radioactivity to crops grown in the Chernobyl Exclusion Zone.

Professor Smith now wants to produce the artisan vodka made from grain grown near Chernobyl, and give 75 per cent of the profits back to the affected community.

He said: “I think this is the most important bottle of spirits in the world because it could help the economic recovery of communities living in and around the abandoned areas.

“Many thousands of people are still living in the Zone of Obligatory Resettlement where new investment and use of agricultural land is still forbidden.”

The team found some radioactivity in the grain: strontium-90 is slightly above the cautious Ukrainian limit of 20 Bq/kg. But, because distilling reduces any impurities in the original grain, the only radioactivity the researchers could detect in the alcohol is natural Carbon-14 at the same level you would expect in any spirit drink.

They have diluted the distilled alcohol with mineral water from the deep aquifer in Chernobyl town, 10km south of the reactor, which has similar chemistry to groundwater in the Champagne region of France – and is also free from contamination.

They are setting up a social enterprise “The Chernobyl Spirit Company” to begin to produce and sell “ATOMIK”, a high quality home-made vodka or “moonshine”.

“We don’t think the main Exclusion Zone should be extensively used for agriculture as it is now a wildlife reserve,” said Professor Smith. “But there are other areas where people live, but agriculture is still banned.”

“33 years on, many abandoned areas could now be used to grow crops safely without the need for distillation.

“We aim to make a high-value product to support economic development of areas outside the main Exclusion Zone where radiation isn’t now a significant health risk.”

The report has been positively received by the State Agency of Ukraine for Exclusion Zone Management.

Mr Oleg Nasvit, First Deputy Head, said: “We welcome this initiative to use abandoned lands to help local communities. It is important that we do everything we can to support the restoration of normal life in these areas whilst always putting safety first.”

Mr Nasvit added: “I’d call this a high quality moonshine – it isn’t typical of a more highly purified vodka, but has the flavour of the grain from our original Ukrainian distillation methods – I like it.”

There are some legal issues to be completed first, but The Chernobyl Spirit Company is hoping to begin small scale experimental production of “ATOMIK” grain spirit sometime this year.

Analytical tests of the water and distillate alcohol were conducted by the Ukrainian Hydrometeorological Institute, the University of Southampton GAU-Radioanalytical, the University of Portsmouth Geological and Environmental Laboratories and an independent wine and spirits testing laboratory.

The artisanal vodka is one of the results of a project led by Professor Smith, a leading expert on Chernobyl, which was given funding to find out when and if it is safe to start using some of the abandoned land for growing crops.

The 4,200 square kilometre human exclusion zone around Chernobyl was put in place due to chronic radiation fall-out following the accident in 1986.

Radiation was detected across Europe. About 300,000 residents were permanently evacuated from their homes after the accident.

Retail sales fall for fifth month in a row