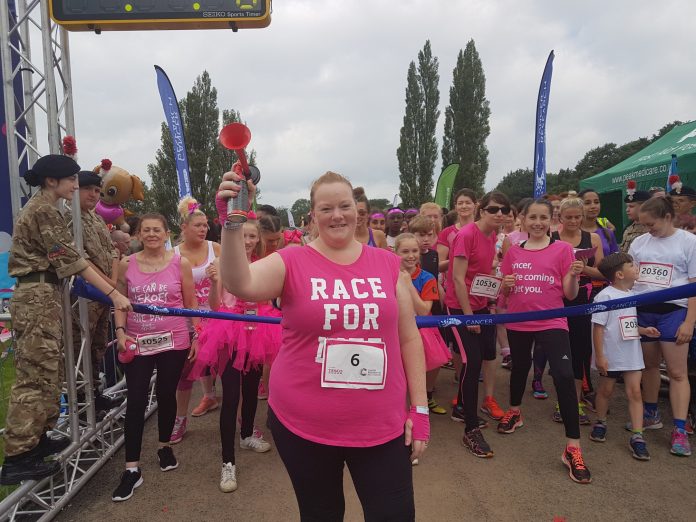 Around 9,000 women joined the fight against cancer at Cancer Research UK’s Race for Life at Heaton Park this weekend.

Runners, joggers and walkers – including cancer survivors and people taking part in memory or celebration of a loved one – took on the Pretty Muddy obstacle course on Saturday 8 (around 5,000) or chose a 5k or 10k event on Sunday 9 July (around 4,000).

Organisers hope the event will raise around £450,000 for Cancer Research UK.

The charity spent over £26 million on research in Manchester last year.

The 5k event was started by mum-of-two Dawn Nisbet from Oldham who was raising money for Cancer Research UK in tribute to her step-mother who has ovarian cancer. Dawn also took part in the Pretty Muddy 5k the day before to celebrate a year since she first took up running.

Kirsti Thompson, Race for Life Heaton Park Event Manager, said: “The atmosphere has been electric – full of emotion, courage, tears and laughter – as thousands of like-minded ladies came together to join the fight against cancer.

“I’d like to say a huge ‘thank you’ to all the women who participated in Race for Life Heaton Park and to all their friends, family and colleagues for supporting them.

“Our participants play a crucial role in helping to turn discoveries made in the lab into better treatments for patients in the North West and across the UK and we rely on their incredible commitment to the cause.”

Money raised through Race for Life helps Cancer Research UK to fund long-term research and pioneering trials, leading to new tests and kinder treatments which could save the lives of men, women and children across the North West and beyond.

Heaton Park Race for Life was the final of this year’s Greater Manchester Race for Life calendar following events at Tatton Park, Stockport and Leigh.

Kirsti continued: “Money raised through Race for Life is helping to drive life-saving research in to over 200 different types of cancer – so every person, step and penny raised counts.

“Race for Life isn’t about being the fittest, fastest or first to the finish. It’s about coming together in the fight against this devastating disease. Our aim is that one day everyone will survive cancer and the more women who Race for Life, the sooner that day will come.”

25,000 released from hospital into care homes at start of Covid crisis without being...