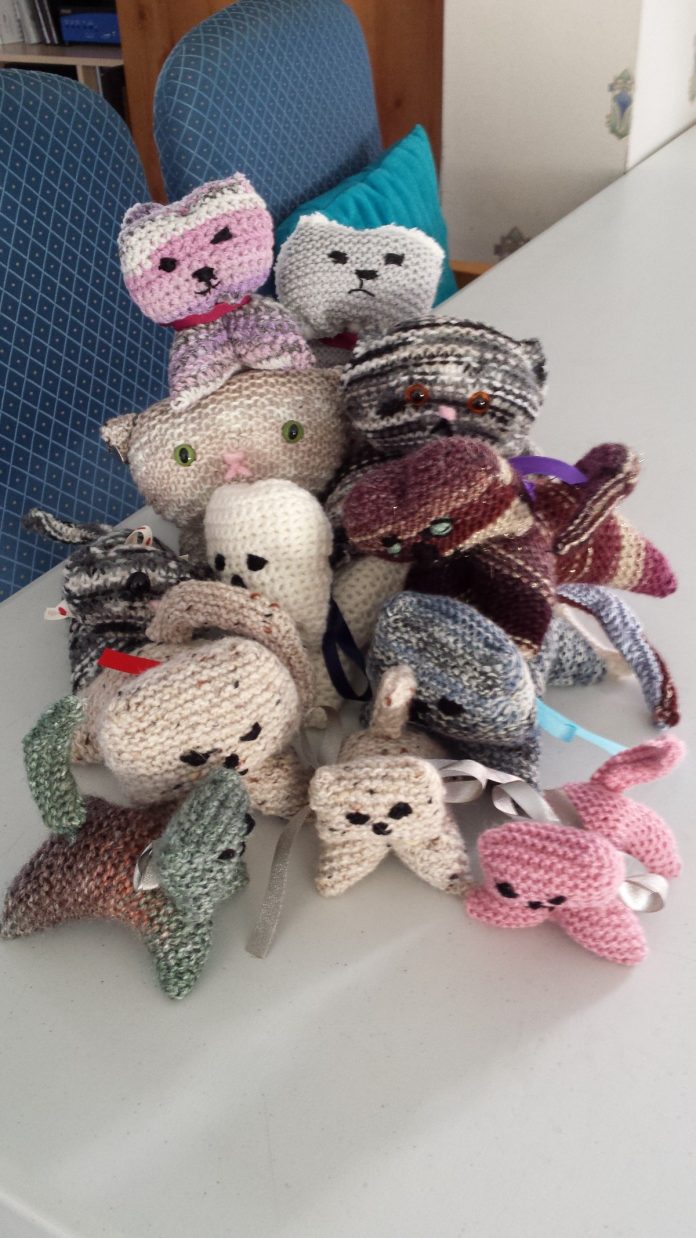 Charitable residents at a sheltered housing scheme have come up with a purr-fect way to support dementia research.

The army of crafters at Wellgreen Lodge in Hale, Greater Manchester, will knit, sew and weave kittens and cats to raise money for Alzheimer’s Research UK. They are hoping to inspire people all over the world to get crafting and send their finished felines back to create a kilometre of kittens and cats. They will then be sold to raise funds for the UK’s leading dementia research charity.

There are free knitting, crochet, sewing and loom patterns available which can be obtained via post or email.

This is not the first time the residents have organised such an undertaking. Last year they organised a “Slither of Snakes” campaign which raised around £1,000 with more than 1,000 snakes produced. A few years previously they had huge success with another campaign which saw the creation of 14,000 knitted mice and more than £10,000 raised for dementia charities.

Libby Swindells, Scheme Manager at Wellgreen Lodge, which is run by Trafford Housing Trust’s independent living service, TrustCare, said: “We did well with the snakes, but I’m hoping this campaign will do better as people like kittens and cats a lot more than snakes.

“It’s a very simple pattern, it only consists of two rectangles and a tube, so hopefully lots of people will give it a go.

“I think the mice campaign did really well because people were able to make them into characters and they will hopefully do the same with the kittens and cats. Someone produced a whole Hogwarts class of mice, there were characters from Terry Pratchett novels and Dr Who mice. It was fantastic and we’d love people to do similar this time.

“We’re always looking at ways TrustCare can support people living with dementia. As well as opening Memory Cafes across Trafford and a Reminiscence Room in each of our 19 sheltered schemes, we also take part in creative charitable events such as this which are fun and bring the community together.”

The campaign will run until April when the kittens and cats will be laid out at Wellfield Park and measured, with the length recorded as a new world record.

Gillian Edwards, Regional Fundraising Officer at Alzheimer’s Research UK, said: “We’d like to say a huge thank you to Libby and the residents at Wellgreen Lodge for organising this fantastic crafting challenge. It’s a great way for people to come together to help defeat dementia and I can’t wait to see all the finished kittens and cats.

“There are more than 850,000 people in the UK living with dementia. Alzheimer’s Research UK is on a mission to end the fear, harm and heartbreak of dementia.”

If you would like to take part, please email Libby Swindells at enquiries@trustcare.org.uk or visit www.facebook.com/KilometreofKittensandCats. You can also get a pattern by post by sending a stamped addressed envelope and your choice of pattern type to Libby Swindells, Wellgreen Lodge, Wellfield Lane, Hale, Greater Manchester, WA15 8NW. This is also the address to send finished kittens and cats to. Local crafters can also pick a pattern up at Hobbycraft at Altrincham Retail Park, George Richards Way.

East Lancashire Railway on the right track as donations hit £100,000