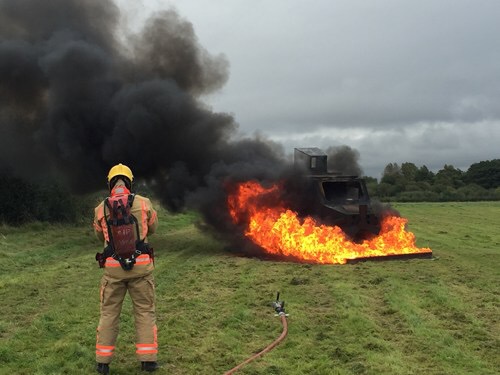 AGENCIES from across Greater Manchester joined forces yesterday in a training exercise to practice response to an aircraft incident.
The exercise at City Airport in Barton simulated the after effects of two planes colliding, where one aircraft was entirely burnt out and the other contained multiple casualties, bringing together crews from Greater Manchester Fire and Rescue Service (GMFRS), North West Ambulance Service (NWAS), Greater Manchester Police and the city airport’s own firefighters.

Six volunteers from the Casualties Union took part in the exercise, each suffering from a range of different ‘injuries’, which were treated by professionals involved in the incident.

Paul Bailey from the HART team at NWAS said: “City Airport in Barton is one of our key locations, so the multi-agency exercise involved a difficult extrication which really tested how the HART team works with GMFRS. Working together is critical for us to learn and see each agencies skills and abilities.”

The Civil Aviation Authority mandates airports to carry out mandatory training exercises like this on a five yearly basis, but City Airport, Barton is keen to test out their ability to deal with big emergencies more often.

Nick Duriez, Airport Director, said: “This kind of exercise is key in testing the airport emergency procedures and multi-agency response. We are required to make sure everything works well together in a full emergency situation.”

Station Manager Steve Jordan from GMFRS added: “The idea of this exercise is to test our resilience and partnership working to this type of incident and we were looking to see how effective we could be with a wide range of resources. The exercise has been successful and it is really wonderful to see everyone working really well together.”

The education gap between disadvantaged pupils and their peers is widening and that’s before...