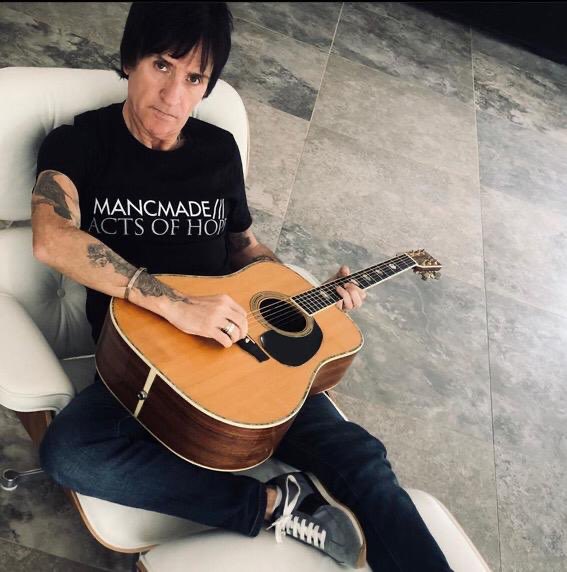 A new album is being released this week with one hundred per cent of the proceeds going to the MancSpirit Charity in support of their Creative Change Homeless Project.

The theme song of the album is “Our City”, by poet Dave Viney, backed by Manchester band (and 42’s records artists) narcissus, whose front man, Ben Guy, originated the project

Having made a donation following an online appeal, Ben was left cogitating on what more could be done to help from within our city’s creative heart. His lightbulb moment was the idea to compile a fundraising album of tracks donated by some of the great and the good of Manchester’s music scene.

Whilst the primary objective was to raise funds, Ben was determined that it should also be a cohesive body of work, featuring a diverse array of talent, at all levels of the Manc music scene, from bona fide Legends through to new artists and including many genres.

Lots of Manc grit and graft later and thanks to support from a wide spectrum of 18 of the City’s musical and spoken word artists, from the highly influential and legendary, to the relatively unknown and up and coming, Bens vision has been realised.

Brimming with individual native and adopted Manc talent, the album comes packaged in beautifully fitting artwork, designed by the 19th artist, local designer and photographer, Paul Evans AKA painted.papillon.smile,, referencing classic Mancunian imagery and reshaping it into an iconic package which unites the contents.

Damian Carr, Co-founder, MancSpirit, “Everything we do is aimed at improving mental wellbeing by creating social connections, providing entertainment and offering people the opportunity to join in, make friends and have fun”

“Our ‘Creative Change’ project started with us visiting people struggling with homelessness on the streets, in hostels and day centres, to listen to their needs for creative activity. We create & facilitate that creative activity to help their mental wellbeing, help them re-engage with the amazing support services out there and, hopefully, help them off the streets and into their own home.

“We value those people and organisations that share our vision of caring for others, helping those that help others, getting stuck in and getting things done. When Ben and 42’s Records offered to support our ‘Creative Change’ project it was exactly what we were about. Greater Manchester’s musicians, artists, writers & designers – Our Creative Community – stepping up, getting involved and taking positive action.

With the arrival of Covid-19 we soon realised that the project needed to be expanded to include other people who had become isolated, especially the elderly.

Every CD, T-shirt or poster you buy provides us with the funds to expand and develop this work across the whole of Our Greater Manchester”

Paul Ludden, MancMade®️ Founder, Co- founder The MancSpirit Charity, “The MancMade /// Acts of Hope Album has taken a huge effort from Ben Guy, (narcissus) Phil Morris and Andy Wood (42’s Records). When Andy called me to say they’d like to support the charity by putting together an Album we had a chat about the artists we could approach. From the start it was massively important to me that this album had a fair chunk of new, up and coming artists

Release date is the 24th April