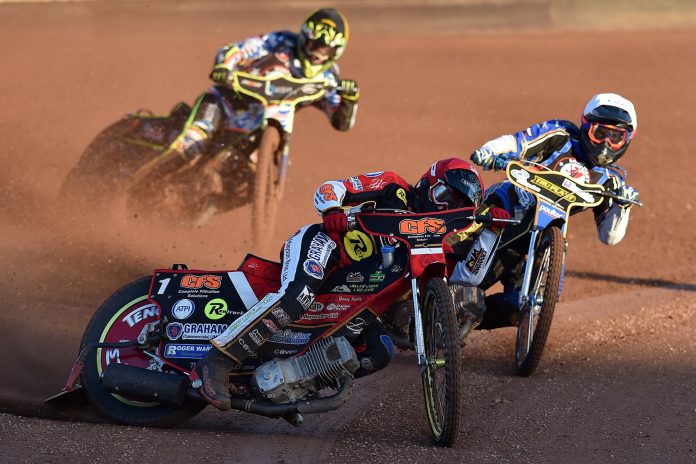 Belle Vue’s fighting spirit prevailed in their narrow 47-43 loss to Somerset on Wednesday, from which they take a consolation league point and maintain their position in the Premiership top four.

The Rentruck Aces came prepared to unite and conquer at the Oaktree Arena, and set out to prove their point with a solid offensive that almost ended in defeat for the Cases Rebels.

Little more than 2 points separated the two teams in the opening heats of the night before the visitors went one better and tied proceedings at 21 apiece after seven hard-fought races.

Subsequent heat advantages in favour of the Cases Rebels helped them build a comfortable lead that, with five to go, would’ve meant a long journey home for the men from Manchester.

But the tenacity of the Rentruck Aces aided their recovery from a steep 10-point deficit, thanks to consecutive 5-1s in Heats 10 and 11, and pushed the home team into a last-heat decider.

Craig Cook continued his rich vein of form by top scoring 14+1 from six appearances, while Rohan Tungate stung his former club to the tune of 9 points while Max Fricke added 8+2.

Team boss Mark Lemon said: “It was a spectacular match to witness. After Monday, the boys were even more fired up to pull off something special and we came so close to getting the win.

“The absence of the regular Somerset reserves was an opportunity we had to capitalise on and, true to form, the boys stepped up their game and performed exactly as we’d expect them to.

“It’s critical for us to be picking up points away from home. Rider replacement didn’t bring in what we know Steve Worrall is capable of producing, but we were competitive and right in the hunt.

“After the meeting, the whole team got together and talked about the direction we’re heading. For me, it was a great feeling because there was a real sense of unity amongst the riders.

“I’ve said before how the mentality of this club has changed. On Wednesday we were satisfied with a point. But our goal is to win, and knowing the boys share that mentality is gratifying.”

The Cool Running Colts face Eastbourne at home on Friday, May 25 while the Rentruck Aces take on Leicester at the NSS on Monday, May 28 at 12pm before later heading to Beaumont Park.

Tickets for both home meetings are now available online at www.bellevueaces.co and at the stadium box office on race night.

No Black Country joy for the Aces