Belle Vue bowed out of their Premiership play off semi-final after a dramatic encounter with reigning champions Wolverhampton in which the visitors triumphed by just 1 point on aggregate.

It was always going to be a tough margin to overcome, despite the Rentruck Aces’ quiet confidence, and it was a heartbreaking Heat 14 moment when their fate was finally decided.

Only 5 points stood between them and a third-straight shot at the league title with just two races to go before a nasty crash involving Freddie Lindgren and Kenneth Bjerre silenced the stadium.

The latter was far from impressed at being excluded, maintaining Lindgren pulled an aggressive locker in front of him, but it was soon apparent that the Wolverhampton captain was suffering.

He took no further part in the meeting and was taken to hospital with suspected head and neck injuries following the incident, while his team mates went on to secure their place in the final.

Frustrated and disappointed at coming so close, skipper Craig Cook said: “We’re pretty deflated, of course. But at the same time, as a captain, I’m so proud of the guys and the job they did.

“Everyone went out there and gave their all. If it wasn’t for a few decisions going against us and a few instances of bad luck we might’ve been able to pull it off, but sadly it just wasn’t meant to be.

“This is speedway though. The play offs is a tough environment but it is so hard to take it on the chin, especially when we’ve been working so hard all year to get here. We deserved another shot.

“It’s not over for us yet, there’s still the Knock Out Cup to come and who knows we might even be able to grab some redemption against Wolverhampton if they come out on top against Somerset.

“We’re still keen for a trophy and there’s a trophy cabinet in our stadium that we need to fill. Obviously we wanted the league title but that’s beyond us now so we have to focus on the KOC.”

The Belle Vue Colts also have work to do in the second leg of their play off semi-final against Lakeside if they hope to continue their pursuit of the National League title this year.

They are back in action in Manchester next Friday October 6 at 7:30pm. Tickets available now at www.bellevueaces.co. 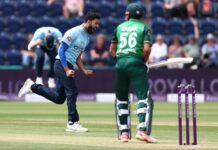 Fricke Will Take It To The Max for the Aces

Eagles Overtaken At The Top