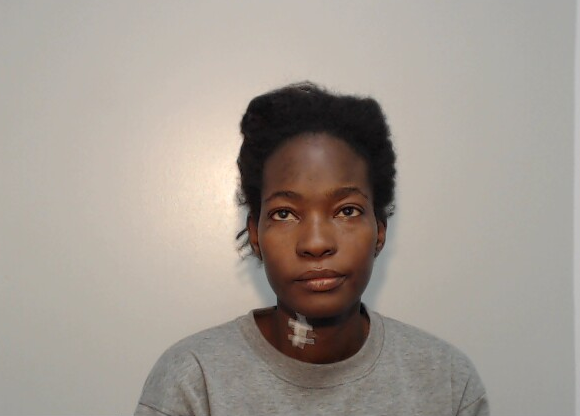 Awa Zongo aged 29 of Atherton Road, Hindley Green, Wigan, was sentenced at Manchester Crown Court, today to life in prison, with a minimum of seven years before parole is considered, after pleading guilty to assault.

The court heard that at around 10.20am on Saturday 14 December 2019, officers responded to reports of a disturbance on Atherton Road, Hindley Green.

The court heard that Zongo was seen stumbling out of a property on Atherton Road towards the gate before then deliberately throwing herself to the ground, feigning collapse last December

When police arrived at the scene, they found that the victim – a woman in her 40s – was being treated by paramedics in an ambulance. She had a knife penetrating her throat with just the handle protruding from her neck.

Zongo was also being treated for injuries by paramedics. During the treatment, ambulance staff handed a crochet hook, which had fallen from Zongo’s neck, to an officer.

An officer who attended the scene travelled with the victim to hospital for surgery to remove the knife from her neck, which caused damage to the carotid artery.

It was in the hospital where it later transpired that she had also had boiling water thrown on her.

The victim also sustained around over 30 superficial stab wounds to her neck, thorax, abdomen and thighs, as well as burns to her face, shoulder, arm and back (estimated to be around 12-20% of her body surface).

A second officer accompanied Zongo to hospital and she was found to have superficial injuries.

Following treatment she was arrested on suspicion of attempted murder and charged with the offence. The prosecution later accepted a guilty plea to section 18 assault.

Detective Constable Danny Ritchie of GMP’s Wigan Division, said: “The victim in this barbarous attack is incredibly lucky to be alive. Thankfully, the serious wound that she sustained wasn’t fatal and I hope that she can feel a sense of closure after today’s verdict.

“My thoughts are with the victim as she continues to physically and mentally recover from this truly terrifying ordeal which has deeply affected her.

“Although she will never be able to forget what happened, we hope the fact that her attacker faces a spell behind bars will provide her with some comfort and enable her to move on with her life.”