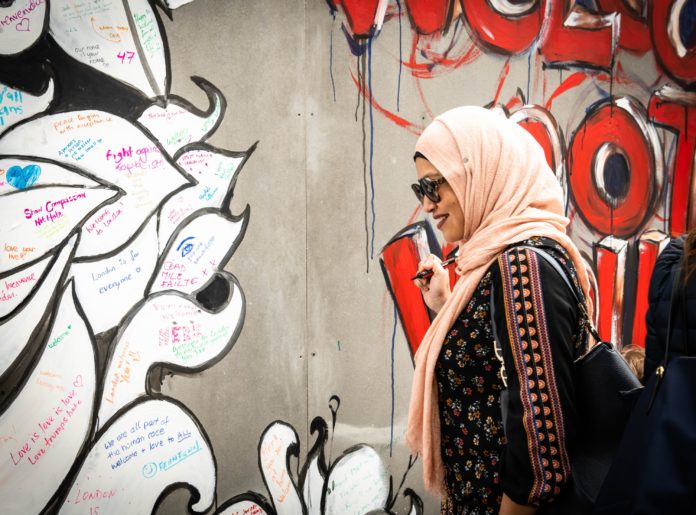 As part of a nationwide campaign, Ben & Jerry’s build a wall with a difference as part of its ongoing effort to support people seeking safety in the UK. And they’re calling on their fans to grab a paintbrush and add their own welcome message in solidarity!

It is created with support from national and local refugee organisations including Counterpoint Arts, a group dedicated to supporting arts by and about migrants through initiatives like Refugee Week.

The wall of welcome, which was initially hosted in London will travel to Piccadilly Gardens, Manchester for Refugee Week (21st and 22nd June), where it will be re-imagined by a migrant artist and will be a celebration of refugee-led music, arts, spoken word. And as always, we’ll be bringing a scoop or two of our chunky and swirly Fairtrade ice cream.

Once decorated with messages it will act as a show of solidarity with those seeking safety and as a demonstration against divisive policies.

This is the latest awareness-raising tactic by Ben & Jerry’s and partners, in their third year of campaigning for the rights of people seeking safety. This includes the current ‘Lift the Ban’ campaign, aimed at restoring the right to work for people seeking asylum in the UK.

Baroness Shami Chakrabarti has pledged her support by contributing with her own poignant message of welcome: ““There is a great but small island on a troubled and shrinking interconnected planet. Sometime, somewhere, we are all refugees.”

Almir Koldzic, Co-director at Counterpoints Arts comments: “People seeking safety are our co-workers, friends and neighbours but every day people are isolated and unable to participate fully in society. The reason we chose to get involved in this campaign is because we believe arts can inspire social change and enhance inclusion & cultural integration. It’s exciting to be able to bring people together with the work of artists like Maryam Hashemi, through such a positive message.”

Rebecca Baron, UK Social Mission Manager at Ben & Jerry’s comments: “Walls are synonymous with refugees – walls to divide and segregate certain communities, but imagine a world where a wall could be a welcome? We believe some of the loudest voices in society are compromising our values of equality and justice, we want our fans to cone together and make their voices heard in welcoming solidarity. Because what’s sweeter than people coming together, to say “we’re all equal, and we’re all welcome here”.

Members of the public can show their support by joining Ben & Jerry’s at the wall in Manchester, tweeting their support using #welcomenotwalls, and join in by signing up to Ben & Jerry’s Social Mission movement here: https://www.benjerry.co.uk/whats-new/2019/06/welcome-not-walls.

Don’t cross Sudoku off your Xmas list just yet