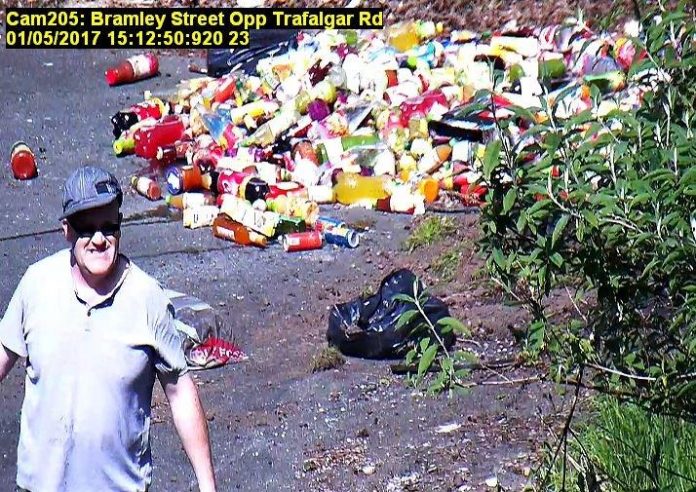 A Blackley man who left a smelly mess of pickles, pop, yoghurt and milk in a Salford street has been handed a £1,128 ‘bill’.

Terence Tyndall said he panicked when someone filled his friend’s trailer with the waste.

Instead of taking the items to the tip, he drove around the corner and tipped it all onto land at Bramley Street, Salford – not realising Salford City Council’s CCTV cameras were watching his every move. .

When council officers went to clear up the mess they found some of the contents had spilt over a wide area, creating a strong, unpleasant smell and rats were already sniffing around. The council had to clear it away and disinfect the site which is close to houses, including an NHS rehabilitation home.

Mr Tyndall, unemployed,aged 53 , of The Fold, Blackley, Manchester pleaded guilty to one offence of to illegally dumping waste on land at Bramley Street, Salford on Monday May 1, 2017, contrary to S33(1) and S33(6) of the Environmental Protection Act 1990.

He appeared at Salford and Manchester magistrates court on Tuesday February 20 and was fined £480, ordered to pay costs of £170, compensation of £480 and victim surcharge of £48, a total amount of £1128

When questioned by council officers Mr Tyndall said he had borrowed a friend’s trailer to pick up a quad bike for his grandson.

It developed a puncture and he had no spare wheel so he left the trailer close to a couple of shops at the end of the street.

When he returned around 3pm on the Monday afternoon he claimed someone had filled the trailer with jars, bottles and cartons. In ‘desperation’ he dumped it in the street. He did not think he would have been allowed to take it into the tip, two miles away, because of the nature of the rubbish but made no attempt to check if that was the case.

Mr Tyndall admitted that if the rubbish had been dumped outside his house he would have been disgusted and said he felt bad about wasting council money which could have been spent on services.

Speaking after the court case Councillor David Lancaster, lead member for environment and community safety, said: “There are no excuses for dumping rubbish in the streets of Salford, creating a nuisance for local residents and wasting public money cleaning it up. Mr Tyndall has found this out to his cost.”

Where are the Police? Nearly 40 per cent of reported crime are screened out...