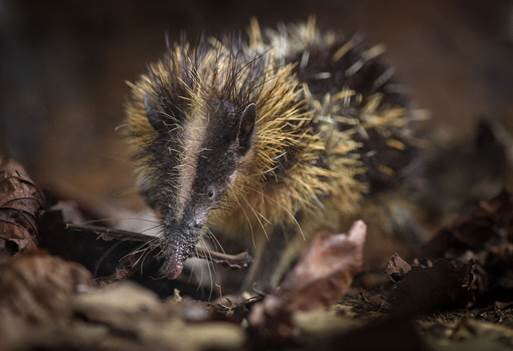 The animals are called lowland steaked tenrecs and the new quartet are the only individuals of their kind to be found in any of the world’s leading zoos.

Brightly coloured like a bumblebee, covered in spines like a hedgehog and boasting a long pointed snout like a bird’s beak, small mammal experts at the zoo say the lowland streaked tenrec is unlike anything that most people will have seen before.
The zoo’s new quartet are thought to be the only individuals of their kind to be found in any of the world’s leading 1,096 zoos.
Lowland streaked tenrecs are found in tropical humid forests in Madagascar where conservationists from Chester Zoo are working to protect habitats threatened by deforestation.

“Lowland streaked tenrecs are spectacularly peculiar and have some incredible traits.

“If they need to communicate with one another then, much like a violinist rubbing their bow across their violin strings, they have special quills on their backs which they brush together to produce high pitched squeaks. They are the only mammals in the world that are known to do this.
“In actual fact though, relatively little is known the about tenrecs and they are part of a highly threatened wider taxonomic group. The loss of a tenrec would mean the loss of millions of years of evolution and a huge amount of scientific knowledge that we’re yet to uncover about these unique mammals. There is a vast amount to learn so the skills our keepers will develop by caring for the species here will be very important and could help conservation efforts in the longer term.”
Lowland streaked tenrecs are highly social animals and live in family groups. They have very delicate jawbones and can only eat soft-bodied insects such as worms and beetle larvae and a small amount of fruit.

Such is their rarity, the zoo’s new quartet are being cared for in a special behind-the-scenes habitat. However, another species of tenrec – the lesser hedgehog tenrec – can be seen in its nocturnal Fruit Bat Forest exhibit.

Footprints in the Norfolk sand are dated at 800,000 years old