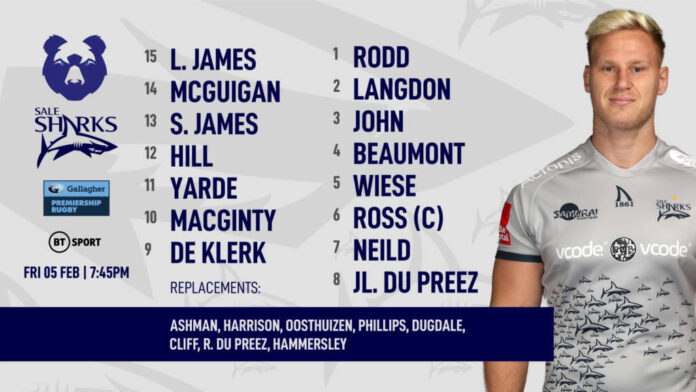 The recently appointed Sharks Director of Rugby makes three personnel changes to the squad that defeated Leicester Tigers in his first game in charge. Simon Hammersley makes welcome return from injury and is named as a replacement for tomorrow night’s top four clash, Robert du Preez is also included on the bench alongside younger brother Jean-Luc du Preez who starts at number 8.

Academy graduates Bevan Rodd and Curtis Langdon continue in their rich vein of form and are selected in the front row alongside Will-Griff John. After a commanding performance at Welford Road in round 7, Cobus Wiese continues to impress in the second row and lines up alongside Josh Beaumont at lock for the first time. Jono Ross captains the side from his usual position of blindside flanker as Cameron Neild and Jean-Luc du Preez make up a new-look Sharks back-row.

Ahead of tomorrow’s top four showdown, Alex Sanderson was wary of Bristol’s threat with ball in hand but believes the Sharks key to success at Ashton Gate is preparing for every eventuality. He said:

“We’re going up against the top of the tree on Friday, a team brimming with confidence and I have no doubt Pat will have a few tricks up his sleeve. We are going down there with one mindset, and that’s to push Bristol for 80 minutes and see where we are after that.

Bristol are an amazingly dangerous team if you give them time and space, they probably have the best club rugby back line in the world at the moment and they have the ability to throw a lightning bolt at you at any time. We have to be mentally prepared for all outcomes and be able to overcome them.

Sharks to open Premiership with a visit from Gloucester