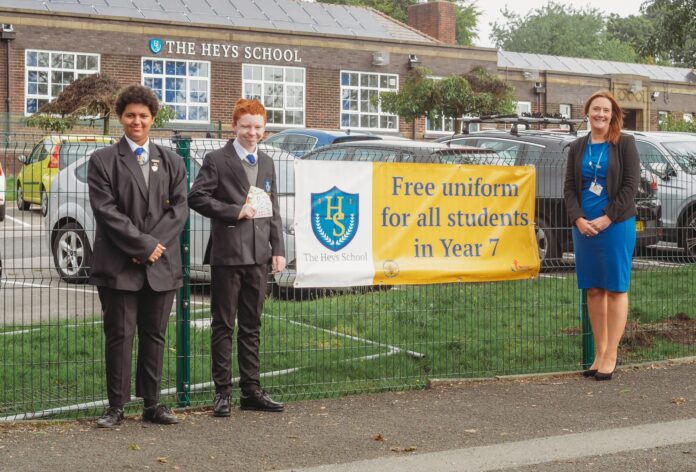 All 760 pupils at a high school in Prestwich are sporting a smart new look after receiving free uniforms.

Students at The Heys School have been given a new blazer, tie, jumper, sports t-shirt and PE hoodie, a package which would usually cost parents around £60 to buy.

Parents have been asked to provide only white shirts, trousers or skirts, and PE shorts or leggings.

The school, which has begun life as an academy after becoming part of The Rowan Learning Trust, is also promising to repeat the gesture to the 2021 Year 7 intake of around 170 children.

The uniform bears The Heys’ School new crest, which was chosen by governors from designs submitted by students. Two entries, submitted by a boy in Year 10 and a girl in Year 8, were merged to form the final design.

Head teacher Rachel Evans said: “As a parent myself, I dread the time when you have to trail your child around the shops to buy their school uniform, and it seems to become more expensive each year.

“The Trust has made a fantastic show of commitment to our school community by providing uniforms for the current students and the 2021 Year 7 intake.

“We hope we’ve successfully taken some of the pressure off parents in these difficult times. Working with our uniforms provider Kids Kirby, parents have been able to order online and have the items delivered to the pupils at school.

“The initiative shows that the Trust is committed to improving the school and understands that any changes we make should not impact on the parents financially, supporting one of its core values – equality.”

The Heys School, formerly Prestwich Arts College, became part of the Trust in June. The Trust is investing £1m in an upgrade to the school site and has secured funds for a second phase of improvements.

Rachel said: “As a school, we felt we needed a fresh start and to make it clear that becoming an academy represents a change for the better and will continue that way.

“The uniform is key to this, and we hope it will help develop a sense of pride and ownership among the students, as we have shown they are important and valued for their input, having been involved in the whole process.

“We’ve changed from having a blue shirt, which was often difficult to source, to white, we have the new crest on the blazer and tie, and we have redesigned the PE kit to include a hoodie and t-shirt, which the students were keen to have.

“We spent a lot of time looking at uniforms that would stand the test of time, be easy to wash, keep looking smart and were responsibly-priced. The feedback has been extremely positive.”

Year 10 student Jack said: “It was great to find out that my design was chosen to be the new school crest and that it launched The Heys School brand.”

Lexi, who is in Year 8, said: “I’m very proud to have played a part in designing the new school logo. I think it looks great on the new uniform.”

Rachel added: “We have many talented, hardworking pupils and it’s always a pleasure to celebrate their achievements.”

She said the Trust has promised to fund uniforms for any pupil who joins the school during the course of the year. A limited number of places are available.

*The Heys School is holding a series of open evenings for current Year 6 pupils thinking of joining in 2021. These will be held in school from 5-8pm on Wednesday September 23 and from 10am-noon on Saturday October 3, with social distancing, and on Zoom from 5-8pm on Wednesday October 14. Parents can book an appointment by emailing openevenings@theheys.school. Updates will also be posted on the school’s website and on social media.

Eight in ten children learnt nothing during school lockdowns worldwide while violence in the...