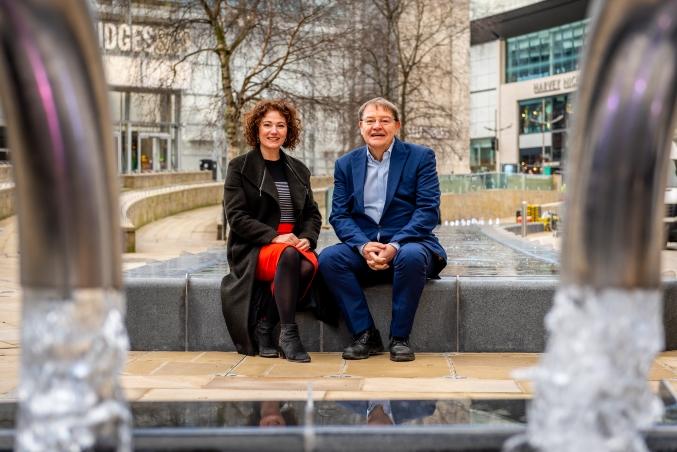 A revamped Exchange Square water feature has been unveiled today.

The three main sections of the feature, which can be found outside the Corn Exchange, are lit with colour-changing, energy-efficient LED lighting and animated with water jets, to continually run through a 15-minute chase, dance and wave sequence between 7am and 11pm. The striking taps at the top of the water feature have been retained and restored.

Sections of the original slate stepping stones have been retained, but have been inlaid and bonded into three raised plinths and set within a surrounding of granite, inviting visitors to sit and enjoy the animation of the water and the lighting.

The new design, say the council, will minimise levels of debris entering the filter system and reduce the damage caused to the original stepping stones, as a result of people walking over the feature. New pumps and filters have been installed, to save energy and reduce the need for ongoing maintenance.

However the opposition Liberal Democrats have slammed the new Exchange Square ‘dancing fountains’, as a reminder of the administration’s “breathtaking incompetence”.

The Labour-run Council have championed the redesign which features “colour-changing, energy-efficient LED lighting, animated water jets which dance and wave between 7am and 11pm.”

But the Liberal Democrats have slammed the fountains as a “constant reminder of this Council’s breathtaking incompetence” and a reminder of just how often they get it wrong.

More than £1m has been spent on city centre fountains in just two years – enough money to house every single person sleeping rough for an entire year, with a hot meal, warm shower and access to a support worker.